The Beginning of Winter

So I'm still alive and fairly sane. I thought that as soon as winter started I would have loads more time to do things such as update the blog but there just seems to be loads of other things to do. Its nearly a month since everyone left and I am trying to catch up. I don't really know how good my memory is but here goes.

So everyone left and we returned to an empty base. Or virtually empty base. It was about 1am by the time we had got all the vehicles refueled and parked up. Suddenly it seemed as if there was no one incharge. Of course there was John the winter BC and the first thing that he told us was that the next day was going to be an easy day. He would check with the ship in the morning to see if they were going to come around and say goodbye to us. We would have to leave fairly early in the morning and meet the ship on the cliff to let off flares. We woke up but unfortunately the weather was rubbish with visability down to about 100 feet, so even if the ship had come around we would not have been able to see it. It was a bit disappointing and so it turned out that our last view of our way off this floating lump of ice was when we were driving up away the night before. So we had an easy day just making sure everything was ticking over and getting used to the extra space that we now have. In the evening we had a massive meal together to celebrate the start of winter. It was very nice. We also chose our rooms, which was done by putting all the good rooms into a hat and each of us then got to go up get a room. I got a pretty good room with a window facing the East, so at least I get the sun in the morning and get to watch the kiting in the evening if I happen to be in my room (unlikely as I will be out there). 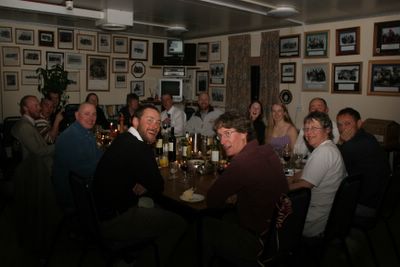 Dinner on the night after the ship left with everyone else. Only us left. Dave still has all his hair at the moment. Photo courtesy of Bob

We also got to pick someones else's name out of a hat, this is going to be the person we will make mid-winter presents for. Since we are normally working over Christmas we tend to celebrate mid-winter (22nd of June?) as it is the darkest day of the year. For this you have to make a mid-winter present for someone else secretly. These tend to be pretty good and people put in a lot of time an effort. Last year there was a robot penguin and even a working steam engine (until it blew up). So I will have to make something good for... oh that was close... I will tell you who at mid winter. It turned out to be an excellent night and about 2am when we were really sloshed we decided to cut peoples hair. 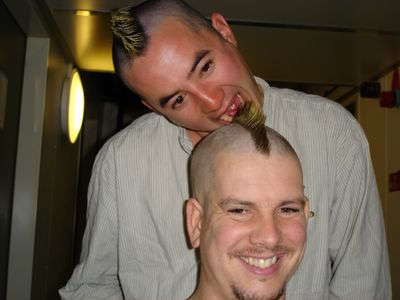 Kirsty and I cut Dave's hair. What a good way to celebrate the beginning of winter. Photo courtesy of Kirsty

We also cut Liz's hair, but this time only a grade 8 all over. I must say its quite satisfying to cut someones hair and it turn our ok. I know the styles are not difficult but its still quite tricky.

We had a few days off, well most of us did. Of course science never stops, so some of the metbabes had to work. About two days later we woke up to a beautiful day and decided to try for a group photo. This also gives me the opportunity to explain who are the 15 other people that I am now stuck with for the next 10 months? 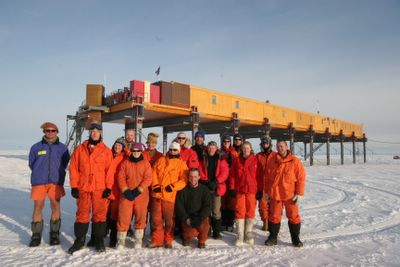 The other significant thing that happened in the first week was the melt tank party. This is something that happens every year pretty much as soon as the ship leaves with the summerers. The summer accomodation (the Drewry) building gets shut down as it is not used anymore. The Drewry has a melt tank to generate water so when it gets shut down we pump a lot more heat into in and have our yearly communal bath. Access is from the snow surface or through up a ladder and through a hole high in the side. It's ace... 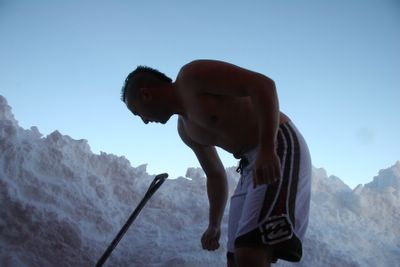 Me just about to dive in. It got down to about -20 degrees that night and it felt pretty cold especially on your feet.

As you can see its really good fun. 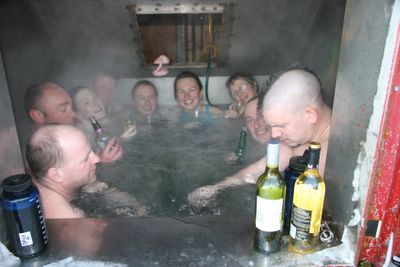 The view of the melt-tank before I dive in.

Later in the evening the first nakedness of the winter occurred as people jumped out of the melt-tank into the freezing antarctic and ran around the Drewry building before getting back in. I tell you the snow was freezing and even though it only took about 30 seconds to run around the building it started to hurt by the time you got back. I think there were about 6 naked runners nearly all male. It was really good fun and I'm already looking forward to next years one. 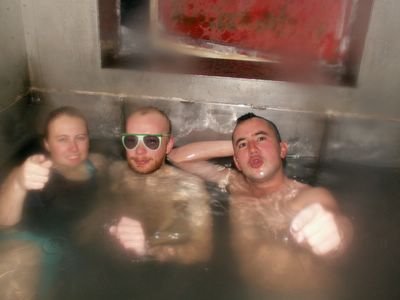 The last three people in the tank.

The next day after the party sledge alpha started to prepare for their winter trip. Sledge alpha (Liz, Kirsty and I plus of course the GA) was the first winter trip out this year. So hopefully I will tell you about that very soon.
Posted by Bigjuli at 7:44 pm

Is that a mobile pool?! Great. For what time can the water be heated?

Gossip & Talks
This blog does not intend to damage, offend or hurt anyone. It is about integrity, critical thinking, street smarts, love of beauty, kindness and perseverance so that all visitors can reach their full potential in reading, viewing and writing.

Howdy Sherlock /// In case you were wondering - this is how it's done / without doubt // The rest is academic.

Where are the nude pic's?!

looks as if it is a bit cold but good fun!