Second Call, the ship returns and takes everyone else away. Arrrgh!

I'm getting really behind on the blog but I shall catch up. The last entry ended with the plane leaving us and that was about ages ago. Oh well the day after the plane left we had about one more day and then the ship turned up and everyone left. In fact there was one last party in the laws for the old winterers and summerers, it was also the night that the leaving winterers set booby-traps for the new winterers to discover when they have left. These include leaving smelly fish in the heating vents, putting potato powder in the milk, tabasco in the ketchup (we actually really liked this). There are probably other jokes that we haven't discovered yet.
The next day everyone woke up early and nearly everyone assembled at the garage. Only about 20 people were left on base. Dropping from 60 people to 20 is a massive change and those that were left behind found it really quiet. Everyone else then got into the sno-cats and the convoy to the ship set off. 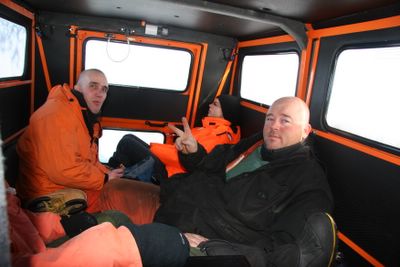 I was co-driver with Ads in K21 the same sno-cat that I was driving for the first call relief which was really cool. It was a bit weird as there was a sort of party feel and at the same time we were all saying goodbye to all the great people that we had met during the summer. The weather was fantastic and the journey uneventful, the route was so smooth compared to first call and I even fell asleep in the passenger seat. We arrived at N9 and there was no sea-ice but the ship was moored up against the low shelf-ice. Very strange to meet all the crew who we spent about a month with and yet who we haven't seen for 2 months. So much has happened and they were not there. They were slightly shocked with the haircut but were all pretty cool. I then somehow got volunteered to work on the ice unloading the sledges that we had dragged from Halley, most of this was rubbish for recycling in the Falklands or the UK. 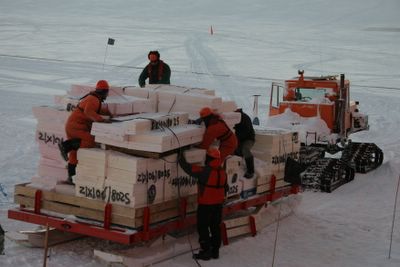 Unloading waste on the sea-ice. It was freezing and there was a crack in the ice just where the sledge was. Its risky but sometimes you have to take them and we had a GA on hand to save us if things got bad.

So a long day on the ice but the reward was great food and an unlimited bar. The ship doesn't limit beer to two bottles a night so it was a pretty heavy night later on. The evening was great though as the sunset was perfect. 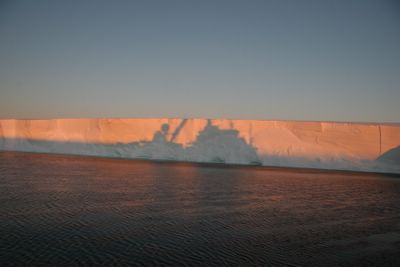 The shadow the the ships superstructure on the ice shelf at N9.

The sea was also cold enough to produce sea smoke... ah just looked it up on the interweb, sea smoke is produced when frigid polar air meets the warm moist air that lies on the surface of the sea which is warmer. The warmer air rises and condenses on the frigid air producing a smoke, it looks like the sea is burning with invisible flames. There was also grease ice, this is when a skin of ice crystals begin to form on the sea surface making it look matt and greasy. In some places there was pancake ice, as you image the ice forms clumps together to form pancakes. This is just the start of the sea ice forming and it'll be two or three months until there is sea-ice thick enough to walk on. 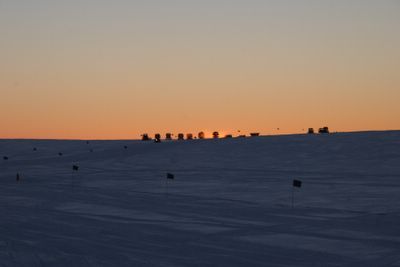 Snocats on the ice-shelf waiting at the top of the ramp for us to collect the next morning and drive back to Halley.

The next day we woke up early with a slight hangover and left after a fantastic full english breakfast (I'd forgotten how good the food was on the ship) and then drove back to Halley. 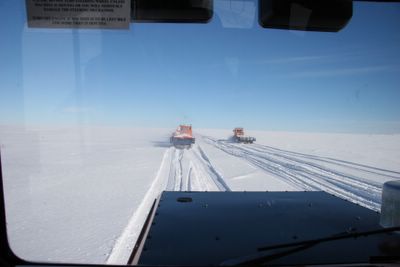 Relief driving, better than motorway driving and I loved it. I don't know why you'd think that you'd get bored but its great, I guess its because its so alien to be sitting and driving on an ice-shelf. Cool. 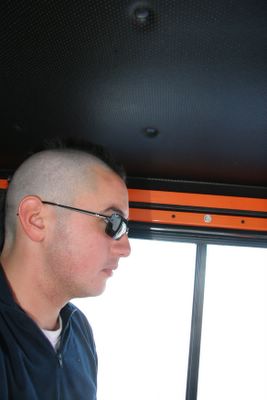 Bob shot (technical term for taking a picture of yourself in such a way so that it looks as if someone else took it) of me driving.

As soon as I got back to Halley, I refuelled the Cat, had a quick lunch and then installed an optical instrument, which took the rest of the day. Looking around the Laws platform that evening it started to sink in the fact that everyone was leaving and that that was the summer over. There had been so much happening that it still really didn't sink in. The next day we had to wake up early and take the final summer stragglers to the ship. Once again it was a fantastic drive except that the contrast was a bit worse. I drove half of it with Lance one of the mobile plant operators in K21 and then swapped with Kirsty so that I got to drive K14 again. K14 is the oldest Cat and is a bit crazy with dials and switches above your head like a plane. 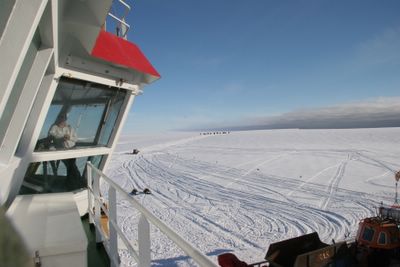 2nd Wave. View of the ice-shelf from just outside the bridge. The captain is looking out and down below the relief is ongoing. Once again the sno-cats await us at the top of the ramp.

We arrived very early and then had a wait around because the crane on the ship was broken. The engineers on the ship fixed it but it took ages. It wasn't so bad because there was a lot to look at. There were the penguins. 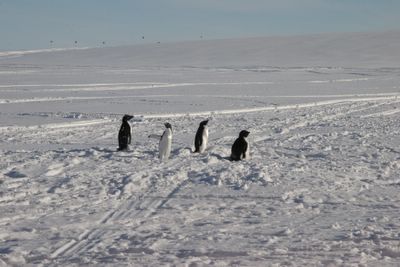 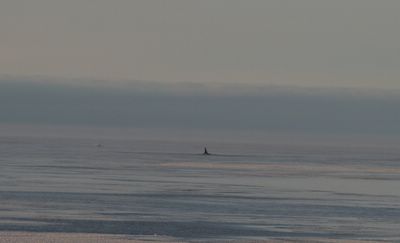 Killer whales. Wildlife! Its amazing after a few months you forget that there are other living things. We only get birds (skuas, petrels of various sorts and the occasional penguin).

So it was getting late by the time they had unloaded all the sledges. Still we had to get back and it was decided that we would drive back in the dark if needs be. There was a chance that the ship would sail further down the coast the next day to a creek closer to Halley in order that we could say farewell properly but it as we walked off the ship onto the sea-ice we knew that we would only seeing the 16 of us for the next 10 months. It was slightly emotional saying goodbye again to everyone. 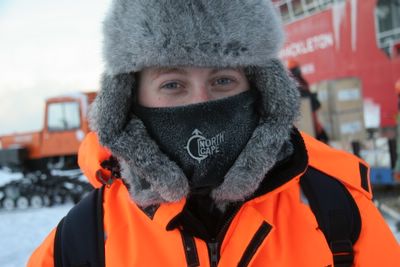 Kirsty just before getting on the back of the sledge. In the background the shack is covered in ice. We will see the ship again at the end of November.

Then the word came from the winter BC to get on the final sledge and move out up to the waiting snocats and the beginning of winter. 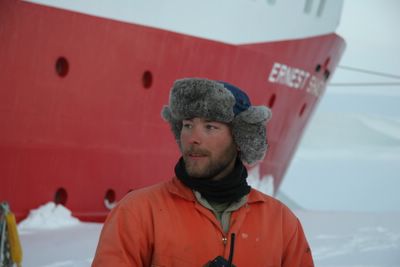 John Withers the winter BC (base commander) rallies the troops before leaving. It was fairly emotional. 10 months man. 10 months. 10 months and only 16 of us. God I hope its good.

I acually got to drive the final snocat away from the ship, so I didn't get the view of the ship slowly receding in to the distance but instead had to concentrate on driving. We then split into our respective snocats and started driving. 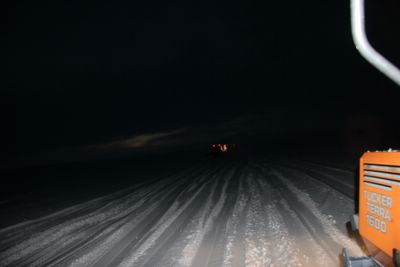 Driving back in the night was interesting and odd as we never seem to use vehicles in the dark. I guess its going to get darker a lot more and we shall have to get used to it. 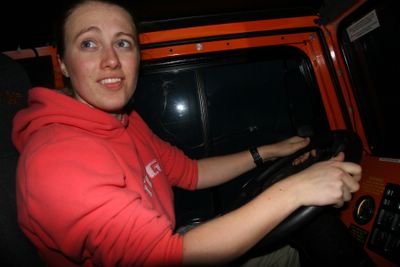 The dream team is reunited for the return journey. It was excellent to be in a snocat with the crazy one (Kirsty) again, it makes the journeys so much more interesting. Kirsty drives the final bit into Halley, narrowly avoiding crashing into flags even if there were a few scary moments.

Driving back was also a bit strange because I was constantly thinking about the whole 10 month thing but not in a bad way but just in a sort of "its finally happening" sort of way. I was enjoying the feeling of starting something that I've never done before and something that might be quite tough. Anyway winter began and we returned to an empty base, which is good as now we all have separate rooms. Whats more important is that it is our base for the next 10 months.
Posted by Bigjuli at 10:35 am

you look a bit bald in that bob shot

thats a good picture of the whale, kirsty must've taken it

When are you going to tell everyone about the winter trip, frances' party, sledge buttercups holiday, nicola's gorgeous chocolate cake, ice rink (maybe only when we've perfected it), snow blizzard, sledge chumbawumba's non existant holiday and soon to come... the shaving of Nancy's head (start of photo diary)?

do i detect a Kirsty theme...?

Hey! Did the clocks go back in Antarctica too?

The clocks did not go back in Antarctica. During the summer we ran on Falklands islands time that is GMT+3. This was to synchronise with Rothera (the other base). During winter we shifted to GMT as this makes communicating with the UK easier. We are actually approx 25 degrees west which puts us nearly two hours past GMT, so as we stick to GMT then 2pm is the hottest lightest time of the day, which is great.

And as the winter closes in
the sixteen wonder what it would bring . Looking forward to hearing about living in isolation as I hope to revisit the Antarctic and over-winter.

Great to read your blog and I hope you have an awesome winter. Is the British base far from McMurdo and Scott bases?

When does the winter and daylight dissappear?

How do you go about getting a position at the base?

McMurdo and Scott bases are on the otherside of antarctica. The british bases can be found here http://www.antarctica.ac.uk. My base is Halley.

i thought there were eighteen of you when you went out there. who went in the pot ?