Its been a long six days since my last entry. I guess it is a good time to take stock of what has been happening, as it is nearly three weeks since we have arrived. I actually feels as thought we have been here for about 5 weeks according to Anto and me but not according to Kirsty (who correctly thinks we have been here for 3). I think it is because of the long hours, the fact that the base is very small so you get to know the place very quickly and because there is so much happening. I hope that this 5 week feeling is not going to make the two years feel like three and I suspect that when things calm down the winter will pass very quickly.

As I mentioned in the last post, the buildings have to be jacked because of the snow accumulation. Last week the jacking took place on my platform (the Piggott). Essentially you put a powered jack on each of the legs and jack it up. Each year the platforms have to be jacked about 1.5 meters because of the accumulation. The jacks only move about 30 cm so the jacks have to be raised and the process takes a while. For the Piggott this took a whole day. Through out this time people had watch the progress. 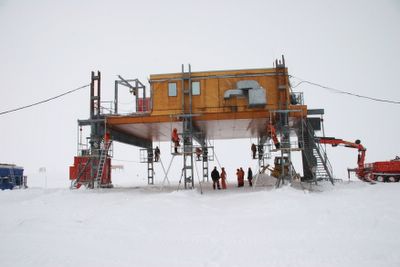 There are also many cables going into the ground feeding electricity and data to and from the experiments, and people have to watch that they don't snag. Of course there is also the pipe taking waste from the urinal and the sink. We don't have a toilet as such but what they call a rocket bog. You poo onto a specially designed paper pouch and when you are done to press a button and the pouch gets dropped into a pan and burn until there is only ash which is then put in the trash compactor. I haven't used it yet, but will tell you when I do. Anyway this raising took place middle of last week as the weather improved enough for them to work. It was still pretty miserable but the wind died to less than 20 knots. 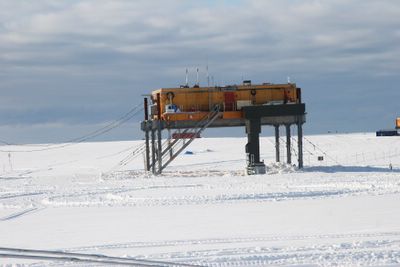 The final raised position, you can tell by the height of the steel legs against the roof of the building.

As the weather improved the mast erectors also were able to get going on raising the SHARE radar. This involves removing the antennae off of 16 masts, adding new sections to the masts and then reattaching the antennae. Once again this is all due to the snow accumulation problem. My main responsibility is the AIS radar but as the SHARE people were a bit short handed I was roped in. This is actually a lot of fun and you get to put a harness on and climb up high masts. Once they have done the SHARE mast raise they will go on and do mine. The SHARE has 16 short masts all about 10m high whereas the AIS has two massive 45m monsters. Most of my time has been taken up with this SHARE raise this week which is good fun.

So the weekend comes around and our one day of freedom from the 11hour days arrives. This weekend there was a pirate themed disco, I think inspired by Peggy's (Alex's) broken leg. So we therefore all got dressed up as pirates. I will try to post some photos of that party soon, but is very difficult to choose them as they are so embarrassing. I got terribly drunk, something I didn't think was possible because you are only allowed a bottle of wine. I must have drunk more. Hopefully I didn't make a fool of myself.

The next day (Sunday) is a day off for everyone, well that is unless you are me and are lucky enough to get a co-pilot trip somewhere. Normally the plane will also have a day off, but because of all the bad weather, they were flying. At ten whilst lying in pain in my bed from the pirate night before (still will a dirty moustach drawn on my face) I was woken up by the BC (Base Commander) with the words, "A84 thirty minutes". So in 30 mins I had to get up get some warm clothes, have breakfast, make lunch and get to skiway. Thankfully the doctor was on hand to give me some paracetamol. A84 is an automatic logging site close to 84 degrees south which is 360 nautical miles from the pole (I think). This is closer to the pole than I am to halley which is at 75 degrees south. It is also probably the farthest south I shall every go. I just wish my head wasn't hurting and that I wasn't missing out on the fun that everyone else was probably having on a sunday. 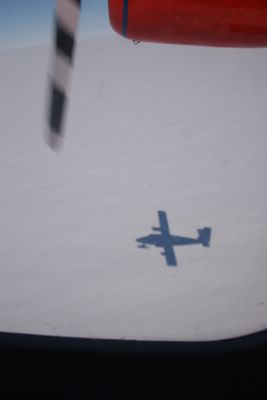 Leaving Halley for A84, airborne for the first time.

The plane was a twin otter. A twin turbo prop about 30 years old. They don't make these planes anymore and they are really tough. They travel at about 120 knots and it took us more that 4 hours to reach A84. It such a long way that we took fuel in the back on the outward journey. Because the planes are so good and that they don't make them anymore they rebuild them when they crash. In fact Victor-Bravo-Bravo, the one that I was in had been flipped and was totally burnt out a few years ago, I will try to find some pictures to post. At the wheel was Ian. 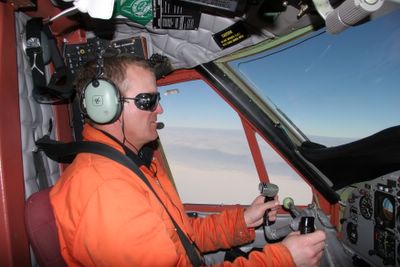 Ian the pilot at the controls.

On the way there, I slept most of the way in the back. We arrived and it was a beautiful day. The outside temperature was -16 degrees and there was 20 knot wind. I quickly did my job, which was to service the LPM and LPR that was there. The LPM or Low Powered Magnetometer is shown below. Essentially is measures the changes in the magnetic field. 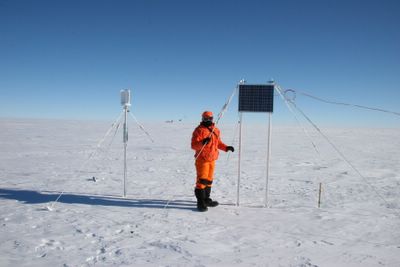 Me servicing the LPM at A84, you can just see the plane in the distance.

This is important because the sun and earth interact and the suns magnetic field wobbles, this in turn affects the earths magnetic field and sometimes results in aurora. Other times it causes satelites to fail. If anyone has watched "The Core" they will know how important the earth's magnetic field is. The LPRs are Low Powered Riometers, these look at background radio noise (from distant galaxies) and uses this signal (which is affected by the atmosphere) and satelite data (which isn't) to work out what is happening in the atmosphere. I carried out the servicing which is essentially just to swap the loggers, thereby getting last years data and the hardware, and putting in brand new stuff. I did this with DJ one of my bosses. After that we helped Jacko the mast erector demolish a 15m mast. We then spent another hour digging up rubbish from the site (old equipment) and loaded the plane up to the gunnels. I then got to be co-pilot on the way back.

I got to fly the plane for about one hour and a half. There are very few features on the Antarctic plateau which makes flying difficult as you don't know where to aim. You do have a compass and GPS though. One of the really amazing things are the mountains. We saw both the Therons (named after the ship that dropped in the wintering forward team) and the Shackletons (both ranges named by Vivian Fuchs in the great transantarctic expedition (Fuchs and Hillary)). I know you won't understand this and I hardly do but it is amazing to see the ground. All we get to see here is snow and ice and anything that is not white is amazing. 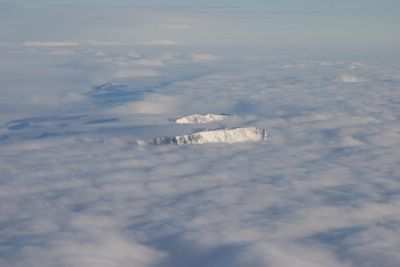 The Shackletons poking their heads above the surface.

We aslo got amazing views of the ice shelf that we live on and from the plane I can understand why is weak and threatening to break up. 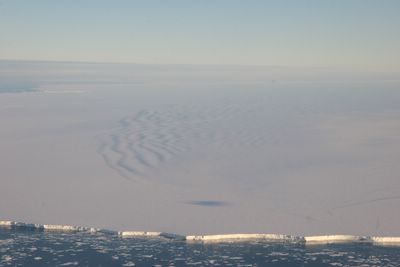 The Brunt ice shelf with strange wobbly streaks of stato cumulus, code 5 apparently according to Frances. 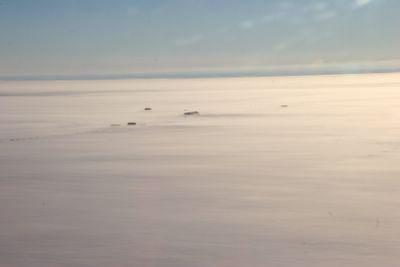 Halley base as we approach finals. The bottom of all the buildings are in fog. The time is 15 mins past midnight and Ian plonked us back on the ground very smoothly.

Having left at about 11am and returned at 12.15 in the morning on my day off it was tiring but fun. I didn't even get a day back although I was allowed a lie in. The weather has also got very good so I have taken every opportunity to go skijouring. I have also been kiting, just learning how to control a 9.5 sq m traction kite. When I get good enough at kiting and snow boarding I will combine the two. 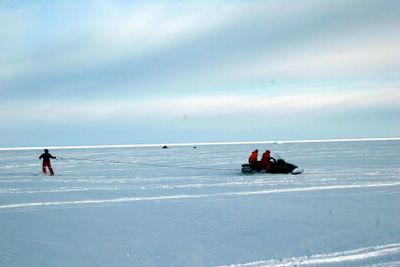 Oh yeah a plane arrived from Rothera and on it there was post. I got a letter from Rachel, which makes her the bestest person in the world. Everyone else is encouraged to write to me otherwise I won't write to them. You can find the address here.
Posted by Bigjuli at 11:36 pm

and where was the sex in the last post?

what is an LPM and how do you service it

So what is the AIS and what is the SHARE and what is the difference? You picked up a year's logged data from A84, does that mean you (or someone) now spends ages analysing it? Is it part of a larger array of LPMs? How do you know it's still running throughout the year? Also how come you have not yet used the rocket bog after 3 weeks, are you constipated? Is someone measuring the salt content of the oceans down there? It is crucial that we do not cross the critical desalination point as you will know from watching the Movie "The Day After Tomorrow".