Its the first entry of the new year and I have been a bit slack in updating the blog. Its all my fault. I also got the title wrong in the last entry as I should have said that it was day 5 of the relief but I was so tired that I got it wrong. The relief all sort of merged into itself. Spending all that time doing quite a mindless thing like driving over bumpy ground at 8 mph will do that. So the relief did end and for me it ended on the 30th of December. That meant that in total the relief lasted all of 8 days. On the final day I woke up and we first of all did a normal run (sort of) in that we drove to the half way caboose and then back to the ship for lunch. It was unusual as we had the night shift in the back of the sno-cat drinking as they had just come off shift and had to be transported to Halley. 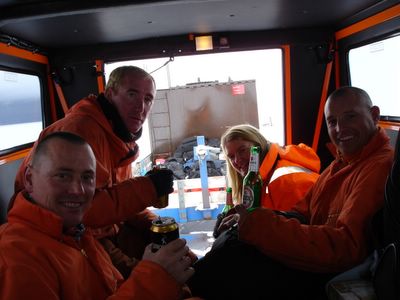 The night shift causing trouble in the back. Notice the missing rear door. Fish the one on the right drove another sno-cat into the back of our one. That is the night shift for you.

We left the ship finally after lunch with the day shift cargo handlers and drove all the way to Halley. We had passed the half way caboose a few times but it was pretty exciting to keep on driving into unknown territory. On the right the McDonald Ice Rumples grew bigger and bigger until we drove straight past. 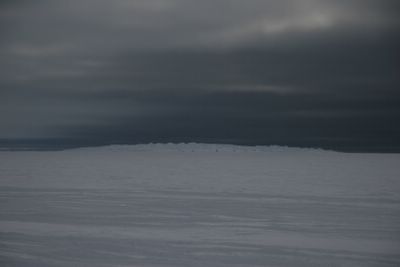 The McDonald Ice Rumples named after the fundraiser who orgainised money for rescuing Shackleton's crew from Elephant Island.

Then about 12km out of Halley you get to see a long thin building on the horizon, immediately more and more buildings emerged. Then for the next hour or so it got closer. For some strange reason Halley station looks bigger the further you are away, because as you come closer the legs get longer and the main building gets shorter. Also from a long way away you think that the buildings are miles apart, but when you are here you find that they are closer together. Another strange thing is that like the tardis, when you get into the base it seems bigger again.

This was taken about 10km out. It looks pretty big considering the distance. I have annotated the picture. I live on the Laws and work on the Piggot. The Drewry is the summer accomodation.

Have to go now, have co-pilot training which involves camping out tonight and learning to survive in the cold. Will finish off the news and add photos later. Maybe the title will give you a flavour of what has been happening.
Posted by Bigjuli at 6:25 pm