Many apologies for the lateness of this entry, it seems that every entry begins with an apology for not updating the blog. One of the reasons is that I am working 11 hr days and trying to fit in loads of recreation at the same time. You can fit loads of recreation in since we are still enjoying 24 daylight. Of course this leaves you pretty tired, so you don't feel like writing your blog at 12 pm when you return from kite skiing or skijouring or whatever. However this time I do have a legitimate reason for not writing this. The reason is the snow accumulation on the base that I have mentioned many times before forces you to raise everything. This raising includes the communications dish through which we get our internet and telephone service. This dish was raised just after the last entry (on the 16th) and when they turned the dish back on it couldn't find the satelite again. This was partly because the dish was set up slightly wrong and was looking in the wrong sector and partly because a few days later we had a massive blow. A blow is basically when the wind gets above about 25 knots, which makes working outside tricky.

Anyway we have been back on line for a few days and I am trying to make amends. 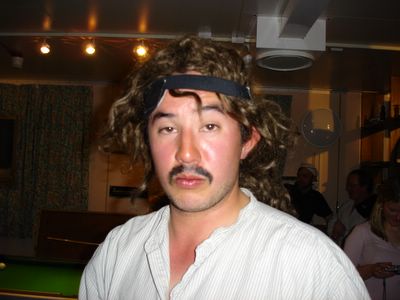 As promised in the last entry a piccy of me at Pirate Night.

See I have finally got around choosing some photos of Pirate Night. As you can see because we are stuck in a small community with not that much to do for recreation (apart from kiting, skijouring, abseiling etc...) we have to entertain ourselves by dressing up. We do have fun and do have alcohol. The alcohol is controlled however (2 small beers a night max and 4 on saturday (or a bottle of wine)). This is a good thing because of the dangers of falling asleep in the snow or other alcohol related injuries. However as you can see it doesn't take much to send me over the edge. Don't worry I haven't done anything embarrassing yet apart from dancing. 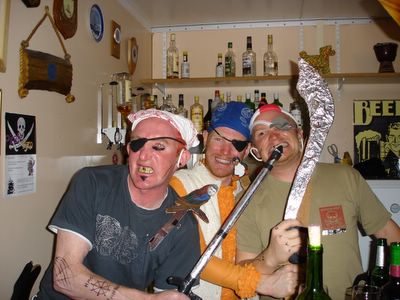 The two on the outside are steelies (this means they are steel erectors/welders) and Geoff is the base general assistant. He's normally the Health and Safety person in Cambridge but every year they send one of the admin people from HQ to see what it is like on base. 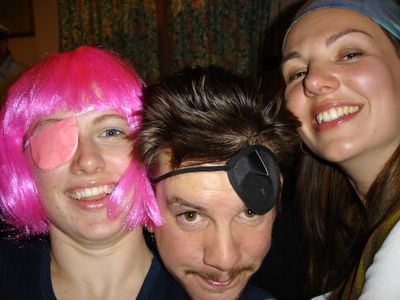 It seems like I haven't seen Dave for ages. He's actually back in Stanley seeing the dentist, so they can get you out of here in the summer. He cracked his tooth doing a fuel raise (as you guessed drums of fuel have to be dug out of the ground because of the snow accumulation). The tooth apparently has to be removed but he should be flying back to use within the next few weeks. Hopefully he will be bringing us goodies from the Falklands.

Pretty much immediately after the last entry I got to be co-pilot again. This was pretty cool because hardly anyone else has been flying and I had just come back from a flight. I think this is because I was qualified to help with the LPM/LPR (Low Powered Magnetometer and Low Power Riometer) stuff. So it must have been last saturday the weather got good for a trip to M83. As suggested by the name, M83 is a LPM site 83 degrees south. Only A84 is farther south of all the likely trips that I could go on so its quite cool to have got to do the most southerly. The flight there was a bit tricky because there was a lot of cloud which meant that we flew at 14 thousand feet. Normally you are required to have oxygen in a unpressurised plane above 10 thousand feet, but here the rules are laxer and BAS doesn't send people with weak hearts south. The flight was pretty good and we got some good views of the mountains. Miriam was in the back and because of the height she had a serious headache, which isn't good for 3 and a half hours. When we got close we couldn't actually see the LPM (see the last entry for what an LPM looks like). So in the end Ian decided to put the plane down as close to the GPS mark as possible and we would taxi to the site. It was a pretty heavy landing but to me it felt ok. Anyway we got to the sight and all we found was a couple of poles sticking out of the ground. We realised that the site must have been moved. So we rang around to try to get the position of the new site. Inspecting the plane however showed that the heavy landing had damaged the rear left ski. 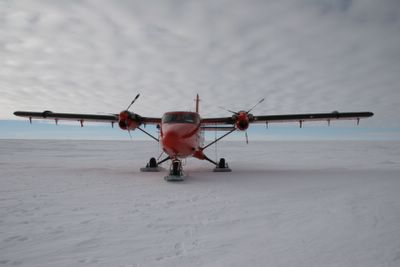 The twin otter at M83. Its broken but you need to get closer to see it. 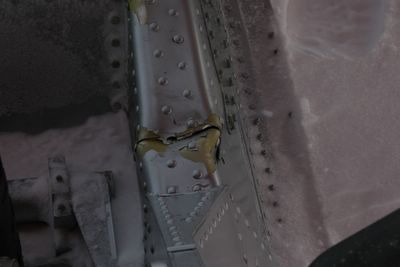 Close up of the broken ski.

This happened because the sastrugi was massive. Sastrugi, are small wind created snow dunes that make the snow surface bumpy. At M83 the sastrugi was about 3 foot high in places which is massive. It turns out that the bad sastrugi was the reason why they moved the original site. The sastrugi had actually damaged another plane in the same way. Suddenly we didn't know if we could get back. We refueled and Ian expertly took off again in really bad conditions. The trip back was uneventful. We saw more funny optical effects and I took a brief spell at the controls under Ian's watchful gaze. We landed back at Halley in what must have been 15 foot visability and nearly missed the end of the runway. I think Ian was concerned about the plane and just wanted to get it back so that they could get it fixed. The plane had to be flown to Rothera in order to be refitted, in fact they just swapped planes so that Halley wasn't left planeless. 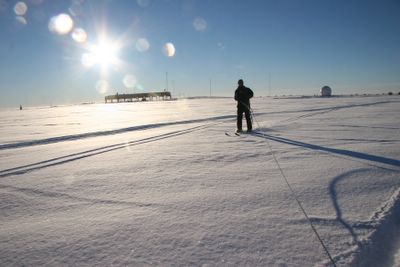 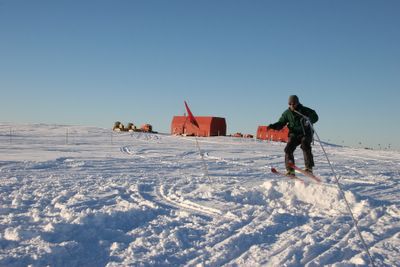 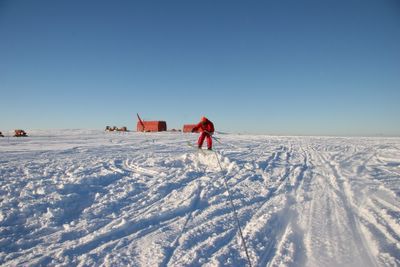 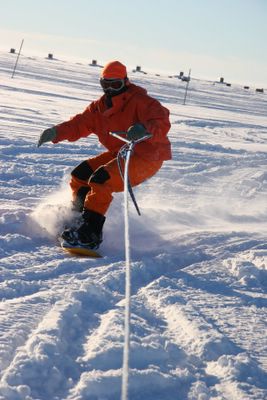 Me learning to snowboard. I'm think I am ok. I also think I will get a board as it is so much fun. 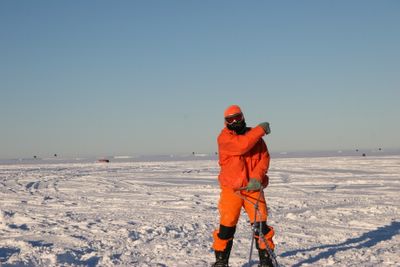 Me pointing out the mirages on the horizon.

The next day was also gorgeous, but I was stuck indoors as I was on gash. As I explained on the ship, when you are on gash you have to do all the cleaning. The difference here is that you are on your own and you have to remain on the Laws platform. For some people this is like a day off work but for me I felt massively couped up. The internet was also down so I couldn't escape. I think cabin fever may be a problem for me. At least I know what to expect now and I think it might be different when there is the internet and the weather is not so good.

We then had the long blow, and nothing much has happened. We have been mainly working indoors. For me this has been designing and making some electronics to do with the AIS radar. I will explain some the different radars and the science soon. I can do this because we have recently given a talk to the rest of base explaining what we do.

The blow is over. The internet is back and I have also had a haircut. This happened after a game of pool with Craig, one of the old winterers. He said he was having a haircut that evening and that he was having a Mohawk. I didn't believe him and he said I should have one. I then said that I would have one if he did. He then had one and so did I . It turns out that he normally has a Mohawk and thought it was really funny that I only agree to one if he did. I think it looks ok. 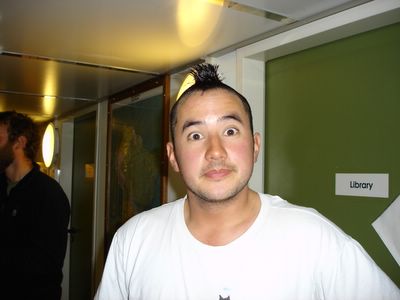 Now that the internet is back I will update more often.
Posted by Bigjuli at 8:13 pm

Cool hair Julius! Hope you're well and having a good time; looks exciting down there!
Emma (and the others- i'l ltell them to take a look at your new hairstyle...)

It's not like you were going to get lucky out there anyway, so I guess this is as good a time as any to sport a mohican.

"Blogs are the way the world learns geography."

Depends what's in it

Greetings from Norway! Looks like you're having a fantastic time down there!!