Steaming towards a long relief

Not too much has happened in the last few days except that we have continued our steady steaming east south east as can be seen in the map below from the BAS website. The Ernest Shackleton's position is shown by the squares. The other ship (the RRS James Clark Ross) current stuck in Rothera due to really thick sea-ice is shown by the crosses. The red ones are the current positions. We are just about to make a 90 degree right turn and enter the pack ice. The ice is shown by the orange mush and the more intense the orange the thicker the ice. As I mentioned earlier the James Clark Ross is current stuck at Rothera because of too much ice. We on the other hand have just been told that the ice around Halley has blown out to sea (you can see the white on the map below). 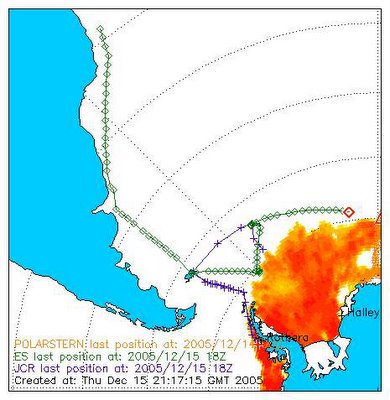 Because there is no ice it will make it difficult to offload the cargo on the ship and perform the relief of the base. What is required is a bit of sea ice that is firmly attached to the ice-shelf and has good access to the ice-shelf. Normally there are suitable creeks close to Halley. The Base Commander and a couple of GAs have inspected the creeks and twin otter planes have been used to look at the ice. The nearest suitable landing spot this year is 65 km from base (this creek is called N9 for some reason). This will make the relief 4 times as long. It will take a sno-cat 6 hours to complete the journey in one direction. So it looks as if the relief this year is going to be tough.

In order to answer the question about how all the animals on South Georgia, Signy and especially Bird Island get their food. I have been informed that krill and fish are plentiful here. The krill feed off algae that grows on the under surface of sea ice. The curcumpolar current runs clockwise (viewed looking onto the south pole) about antarctica, it hits the antartic peninsula and is thrust up towards south georgia bringing the abundant food with it. Of course the animals eat each other and I include a few pictures. 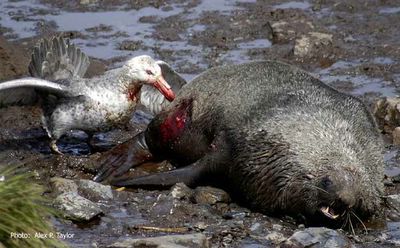 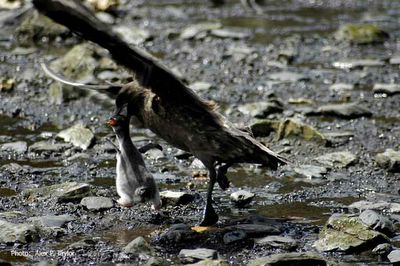 On a dirtier note it can be seen that some seals are not very clean and they stink. 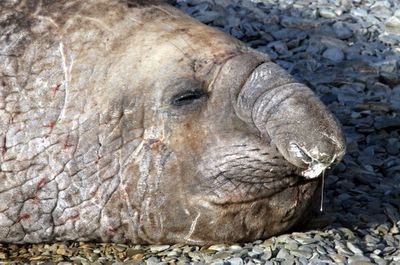 Male elephant seals are not clean a bit like male humans.

Krill are probably the main foundation for the entire world ecosystem. Jules - try not to kill to many. They are quite small. They also move around dependant on moonlight and lunar gravity I believe.

Nature - red in tooth and claw etc etc. good photos, quite unpleasantly gruesome. But I want to see some sea ice photos, or maybe an iceberg.