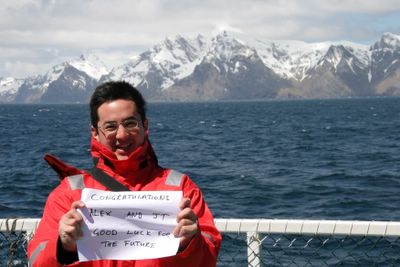 Its a lot colder than you think.

Well done to Alex and JT back in Cambridge, I guess you should be married by now and soon you will be at your reception. I wish I could be there (only for the evening though as it is pretty cool here).

I've been incredibly busy over the last two days and would have been busy today but the sea is too rough for us to put ashore at Bird Island so we are steaming up and down in a long rectangle of water to the north west of the islands. Apparently it is probable that we will be doing this until tomorrow. It is also the safest thing to do when the swell is too big. This lull in the activities gives me the opportunity to update this thing.

So we arrived in KEP on the 8th at about 6 am and immediately unloaded supplies. Because lots of ships come here there was not that much food, but there was a lot of gravel and wood as they plan to build a new jetty here. As there was little to man-haul most of us had the day exploring. I when with a small group which first looked around the old whaling station at Gritviken just around the corner.

This a an very strange place with a film set feel. It was a Norwegian whaling station until the end of the sixties. They then left it, fully intending to return in a couple of years to restart it, but then internation pressure forced them to close. This meant that everything was left exactly where it was including loads of whale oil. A very good museum has been openned and the place has been tidied up but all the equipment is still there. This is also the place where Shackleton is buried on his last trip south and where he came to get help in his famous expedition. There were elephant seals and this time the more aggessive fur seals. These fur seals are very territorial and will attack you for no reason at all. They don't cause a lot of damage but because their teeth are so dirty bite get badly infected. There were also king penguins on the beach, these look like smaller less fluffy emperor penguins.

Our group then climed over the col at the back of Gritviken down into the next bay Myviken. Here there was a large fur seal colony and also a gentoo penguin colony. Luckily we had a GA in our group who knew how to handle the fur seals (you have to stand your ground making noise such as clapping or smashing rocks together) and we shuffled onto the beach. We set up camp and it was a bit like Zulu surrounded by males who wanted us off prime real estate. We spent the whole day looking at the seals and penguins before returning to the Shack. I was completely knackered and my right knee was busted. Had a BBQ in the evening with the KEP people in their boat house.

Yesterday, got up at 4am (it gets light at 3am) and went for astroll to Shackletons memorial which is not where his grave is but is on the point behind KEP base. 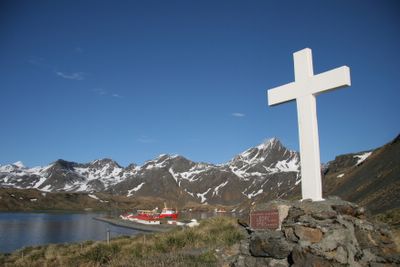 The fur seals here were very aggressive and a few times I lost my cool and had to run away. Had another look around Gritviken. The boat then left KEP to steam around to Hound Bay also on South Georgia where we unloaded food and equipment for a 4 year project looking at a king penguin colony. This took all day and everything had to be man-hauled up to the camp. In my broken state, from the day before, I hardly made it. The camp was about half a km, of seal infested tussac grass, from the boat landing point and some of the boxes were close to 50kg. 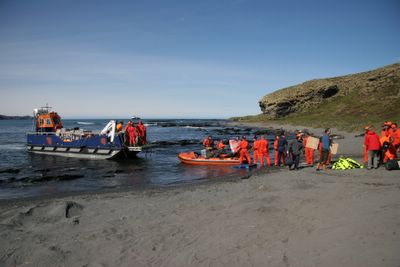 Once again the fur seals were dangerous and one charged a few times. These ones had many more pups and although the tiny fur balls were very aggressive and inquisitive they were cute and not dangerous. There was even a white one. 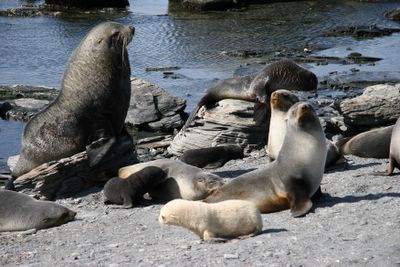 So in all likelihood I will be working again tomorrow unloading cargo into bird island. There are even more fur seals. Apparently every year everyone who winters there gets bitten. I'm not looking forward to it.
Posted by Bigjuli at 12:48 pm

I believe you when you say it's cold Julius. And can anyone get a photo-shout out? Or can we make requests to get a Juli-big-up for friends?

Will, you can only get a photo-shout out if you are getting married or giving birth.

So the blogging is good. The photo shoutout is good. The penguins and the white fur seal are cute. The snow looks cold but only a little bit what are you some kind of Pommie softc*ck

Juli, i love the photo of the seal saying Hi. Can you get any more photos of wildlife saying things?

Where is the food to feed such a large population of birds and seals either there must be lots of fish or they are all eaten!