Sorry for being a bit slow at getting these pictures up. As I mentioned earlier, this year because of the sea-ice situation (too little - global warming?) we have been forced to carry out what is known as an N9 relief. Its so called because the creek which looses its ice last happens to be called N9, this is where the ship and therefore I am based for the next 10 days. N9 is 65 km from Halley and we arrived here on wednesday evening for a quick look at the ice.

Three Emperor and one Adelie penguin came to greet us at the creek.

There were a few people on shore as well as some wildlife and the penguins above. The people ashore had driven the sno-cats from Halley and had prepared the ramp from the sea-ice to the shelf ice. Having had a good look the ship then proceeded to smash into the sea-ice. 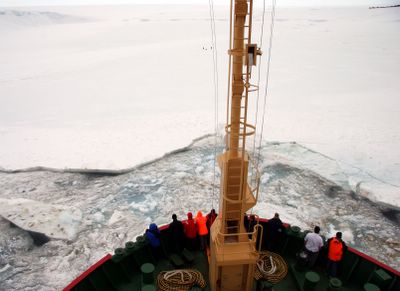 The weaker sea ice is broken away by ramming the ship into the ice. The ship then nibbled a straight edge to dock against.

The result is a strong sea-ice for unloading onto. The ship then wandered up the coast to have a look at the other creeks closer to Halley even though it was known that there was no ice there. While this was going on the passengers (fids) sang carols and had mince pies and mulled wine on the focsle (sp?). This was strange as it was in full daylight and we were rubbish at singing.

The next morning we moored up and began unloading. While this started up I got my training for driving sno-cats on the shelf. The picture below shows my team and vehicle. 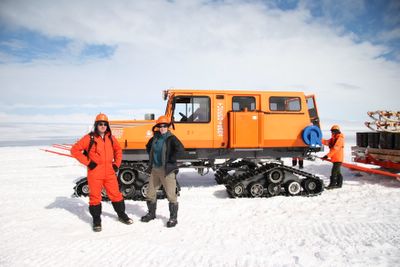 The Dream Team in front of Sally the sno-cat K21. I'm on the left and Kirsty is on the right. This was taken when we were practicing hitching on sledges which is really difficult.

After learning how to drive and hitch sledges and look after our machines. We had to wait for enough unloading to occur so that we could do a run. As I mentioned the distance from Halley to N9 is about 65 km. At about 30 km there is an antenna on a mast for VHF radios. There is also a caboose (container/hut on skis) where you can get a brew on. This has become known as the half way caboose and our run is from the ship to the halfway caboose. Other sno-cats from Halley come with empty sledges and we swop. They take full sledges to Halley and we take the empty ones back to the ship. As there were not enough loaded sledges yesterday, I help loading them on the ice. 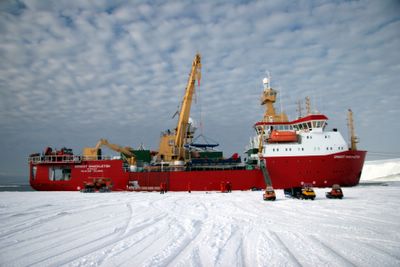 The Ernest Shackleton discharging cargo a german sledge onto the ice.

Today had our first 12 hr shift and did two runs. The sno-cats only go at 8mph when pulling an 10 tonne sledge so it has not been the most thrilling day. But it is exciting because of the bumps. Its a totally flat ice shelf with bumps all over it. On the last run we ran into a fog bank and had to slow right down to make sure we could see the flag-line that marks the route. All it all a satisfying day but I can see that it might become a drag. Fairly knackered so I will get some sleep ready for my next 12 hr shift tomorrow. Some of us don't get christmas, which reminds me
Happy christmas.
Posted by Bigjuli at 11:27 pm

Happy Christmas from all of us at the Grange

Merry Christmas Julius, you're not missing much, just too much food, shit reruns on the telly and drinking till you fall asleep.

By the way, you look so, so gay in an orange jumpsuit and big helmet.

Merry Christmas Jules and Will, if you are reading this. Actually I thought you looked like Luke Skywalker in the 1st old Starwars movie, but think Will might have a point. Is it the jumpsuit or the way that you are standing...