Samba, more training for Halley and sleeping on deck.

Yesterday after a very alcoholic race night. It has been good to have a day of relative rest. We were supposed to have an inspection by the captain but I never saw him. The biggest thing to happen was that Dave the Comms manager (he with the link on the right of the blog) got out his samba drums and invited us to join him for a bit of a bash. I can honestly say now that I don't know why I didn't do this earlier. It was so much fun. 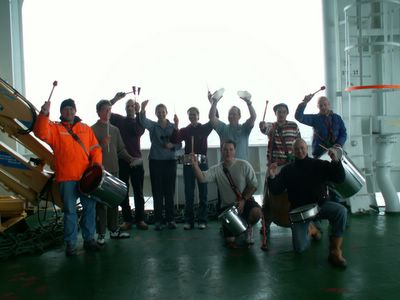 First samba practice. Picture taken by Dave the Comms manager and the mestre.

It was relatively easy to make a half decent sound and by the end of the one and a half hour session we could play one tune with all the intros and breaks etc... pretty well. I am hoping that after a year of training we should be pretty good. I will try to get a video of us playing in the snow. I think I hurt my left hand banging it on the rim of one of the big drums (surdos apparently). In the picture above we are one the Poop deck banging away with iceberg all around, which you can't see.

Yesterday was also the day that we officially crossed the antarctic circle (66 1/3 degress south). Apparently it used to be a tradition to go and sleep out on deck the first time you crossed the circle (I don't know if this is a myth or not, but apparently its a bit like the crossing the line (equator) ceremony). So three of us, Andy, Alex and I decided to go and sleep up on the monkey island which is on top of the bridge. In order to make ourselves warm we borrowed some P bags. These P (Personal) Bags are sleeping kits for sleeping in pyramid tents in the field and are really warm. 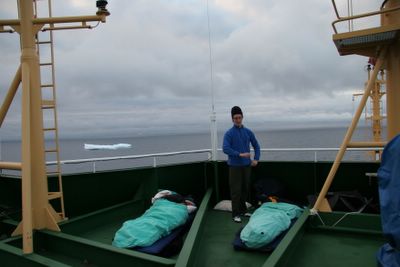 Preparing for bed last night on the monkey island. Alex the data manager demonstrates the equipment. My bed is on the left. The temp is about -2 degrees C and the time was about midnight.

In fact last night I was too hot. I didn't get the best nights sleep as I woke up a few times. The first because I was too hot the second because my face was too cold. Then it started snowing but only lightly and not enough to worry about. I finally woke up at about 8.30 and the others had left me all alone.

We started to hit ice again this morning and that didn't help my sleep. 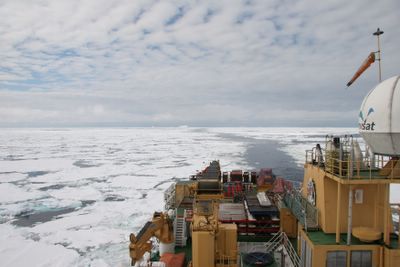 Our route through the loose pack ice this morning.

The rest of the day was spent getting a relief briefing. This told us what to expect on the sea-ice and all the nasty ways in which me might meet our maker. The sea-ice at the N9 creek is just over 2m thick and they are going to drive bulldozers across it. The sea-ice drivers have to drive with a hatch in the roof and the door open so that they can leap out if the worst happens. There are a lot more details about crevasses. We are also going to be given our jobs and our shift soon. We all split into two 12 hour shifts (8 til 8) . I will probably be working ship side cargo. We also practiced stropping and slinging so that we can safely load the palettes for the cranes.

Tomorrow we will learn about the vehicles, radios and some basic camping stuff incase there is a white out. I will also find out exactly what my job is and which shift I will be on. Once relief starts I will probably be to tired to fill this in, but hopefully I will fill in the gaps later.
Posted by Bigjuli at 6:27 pm

Sea ice - cool! thanks for fulfilling my request. Good luck with the dozers and the ice, don't fall in the southern ocean...