Been having a day of rest today having worked very hard yesterday. We are currently sailing east south east towards the Brunt ice shelf and should be fairly close to Halley in about 10-11 days. We still might not reach Halley until the 24th as there is sea ice to smash through and we have to set up a fuel dump on the ice somewhere.

Yesterday was amazing as I was lucky enough to get ashore on Bird Island. I was one of four people doing cargo handling on the shore. I got to spend the whole day ashore, working for the first half and looking at wildlife for the last bit. Other people were not so lucky and only got ashore for a short while or didn't get ashore at all. When the surveyors got around to naming this island they got it spot on. The whole island is covered in birds and seals. I saw wandering albatross, grey headed albatross, lightly mantled sooty albatross, South Georgia pintail, northern and southern giant petral, skua, macaroni penguins, gentoo penguins and of course seals. I quote from the BAS website,

"Bird Island has a rich diversity of wildlife and is afforded special protection as a Site of Special Scientific Interest. It is home to about 50,000 breeding pairs of penguins, 14,000 pairs of albatrosses, 700,000 nocturnal petrels and 65,000 breeding fur seals. In total, that amounts to one bird or seal for every 1.5 m 2 making Bird Island one of the richest sites for wildlife anywhere in the world."

And the island is only 5km long and 800 m wide. When you arrive you get given a broom handle to fend of the the seals which are very terratorial. It is best to avoid eye contact and move past them quickly. I must say that having a stick gives you a lot more confidence but you still have to wary. 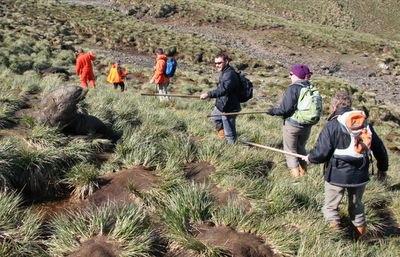 Fending off the fur seals with broom handles.

In order to get the cargo to the base a trolley had to be pulled through the seals. A number of minders for each trolley were used to keep the cargo and pullers safe.
Looking at the picture below you can see that the beach in front of the base is prime seal territory and is covered in seals. 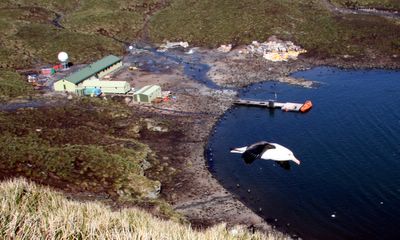 After moving all the cargo and helping clean up the jetty (cleaning and hammering) a group of us went to "Big Mac" a macaroni penguin colony on the other side of the island. To do this we had to pass all the breeding site of the other birds. It difficult to describe how other worldly this place is. You have to be very careful you don't step on something. The wandering albatrosses were amazing and the adults can weigh 15kg and have a wing span of 11 feet. Luckily we were with one of the scientists who was an expert on the sea birds so he explained everything. We got to Big Mac to see thousands of the little cuties. In the picture below you can see that the slopes behind Austin (one of the steel erectors) are covered in penguins and you can imagine how long and hard it must be to make it up that far for them. 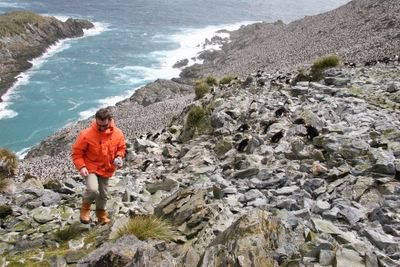 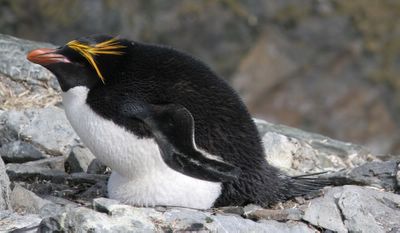 Finally after an amazing day we got back to base, had a cup of tea and then got back on the boat. The ship then left pretty much immediately. There is more to tell but as I said before it is hard to decribe what it is like and I urge you to visit bird island if you ever get an opportunity. There is a party on board today as it is one of the chef's birthday. I better go and join them. Have a penguin. 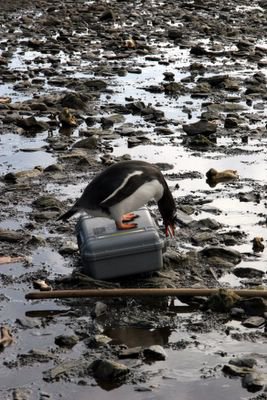 Penguin on a pelican case.