Catchup 1: A brief journey through December

Looking back at my blog I can see that I have a lot of work to do to catch up with what has happened in the last few months. This is the first attempt that I have made since the beginning of december and as usual the reason for not being able to write the blog has been that I have been amazingly busy. As usual my nights haven't been enough to catch up on everything. But hopefully this is a start. At the end of the last entry I mentioned that a second Basler aircraft flew in and with spares etc... in order to fix the broken plane. That plane disappeared and we resumed our time digging up things burind in the snow and raising them in preparation for the summer.

For me, as mast officer, this involved a lot of raising turnbuckles as the snow just keeps on falling here. 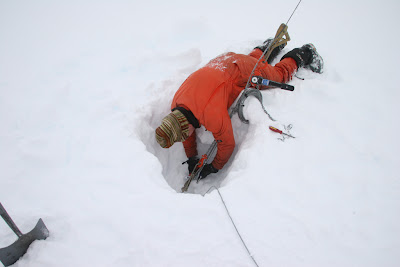 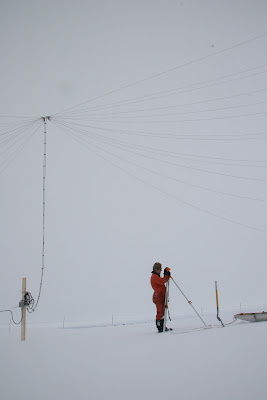 Once they were all raised we then used a theodolite to carry out a mast survey. This allows the RAF summer masties to come in and decide what work needs to be done.


One of the new things that we have done is to start ice carving. We had some blocks of ice and a few old chisels from Liz the chippie and just started to chip away. As expected we immediately started to carve penguins. Then Fran came out and started to carve a snocat. (These carvings were never completely finished and just before relief, Kirsty and I took them to the Maggy shaft where the temperature hovers around -10 degrees C for safe keeping. Hopefully we will finish them off and I will get some good photos to show you) 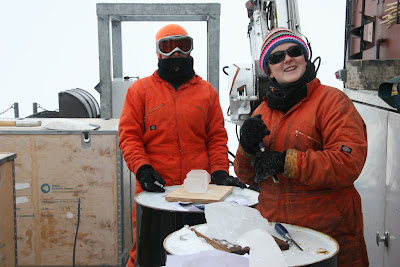 Kirsty and Fran show off their carving on the Laws south platform. The most surprising thing is how soft the ice is when you have a sharp chisel to use. It just cuts like some sort of plastic. I thought it would be really hard and tough. You can do very detailed work.

One of the other things we have to raise is the catenaries. The catenaries are what we call the cable runs to the antennae. These cables hang on large fence posts. 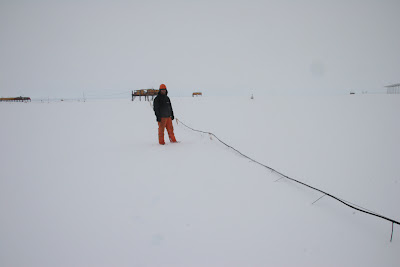 Here John shows how low a catenary can get. When these are raised they are about 8 foot above the snow surface.

With the expected coming of summer we also had our final winter party. Its all a bit sad that we are saying goodbye to so many people. And after a year we really got used to each other and made some amazing friends. Of course six of us were staying which was good. We have also had a year of samba playing with our drum guru Dave (Band Name: Drum line) and the Halley band had also been practicing for at least 6 months. This was our last opportunity to show off to each other. Another interesting contruction was the making of Vodka luge. This massive block of ice was made by taking a bucket of water and leaving in outside. 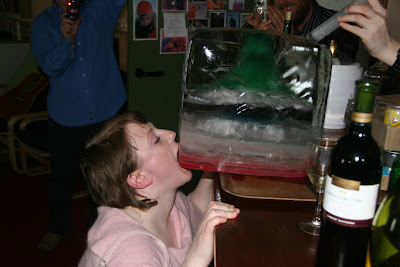 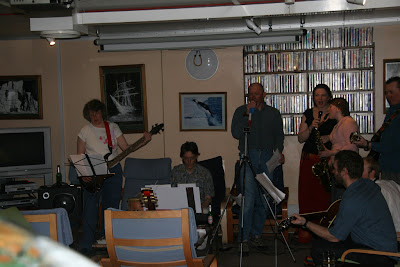 The Halley band run through their greatest hits. 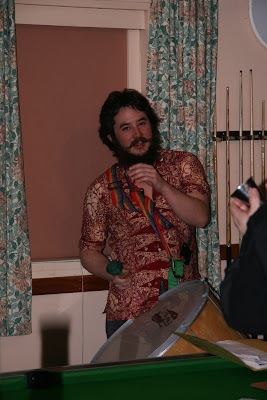 Me playing the surdu with Drum line.

One of the more interesting raising jobs was the raising of the Halley 6 Automatic Weather Station (AWS). This AWS is sitting at the site of the new base and is about 15km away from Halley 5. One of the interesting things here is the accumulation at the site. There seems to be more accumulation here that nearly anywhere else I have seen. 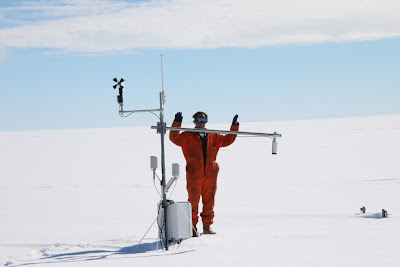 On arrival at the site we realise that the accumlation has been so large that the solar panels are no longer available and that there is going to be a lot of digging to do. Chris shows how low the sensors are. Luckily it is a wonderful day weatherwise and its a lot of fun. I feel sorry for the Halley 6 winterers if this is the accumulation they are going to get every year. 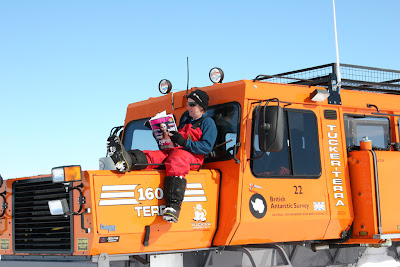 Liz shows that you can read Cosmo anywhere during one of her breaks. 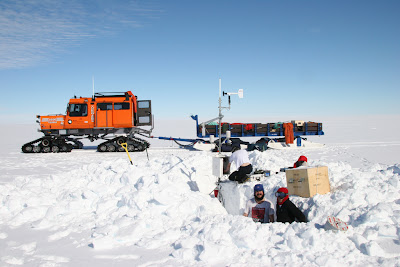 Digging seems to be all we do here before summer. As you can see the weather was really great which meant that we were digging and sweating in our t-shirts. We excavated a massive hole in order to get the wires and batteries up to the surface again. 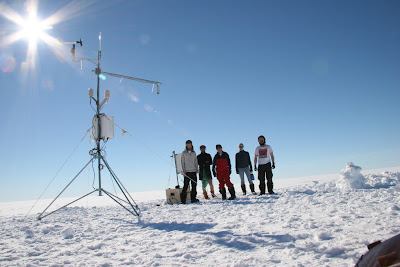 The raising team after we had got everything out. Reading from left to right we have Andy, Chris, Liz, Kirsty (team leader) and me. We actually moved the Halley 6 site 5m closer to Halley 5 as the AWS is the only thing that marks the new site.

During this time we had the damaged Basler repaired and then flown out via us. So once again we saw the canadian pilots. We finally also had the Germans fly through with their Dornier 228. They returned a few days later with Pat the Summer BC, Martin and Ben (Vehicle Division) in order to prepare for the arrival of the ship. We also had the BAS twin otter arrive from Rothera. On board was the head of my division Mike Pinnock and Mark Maltby one of the Rothera Electronic Engineers who came over to help install a new medium frequency (MF) radar. This was to be one of my summer projects, that is to install the MF radar.

The ship then got stuck in heavy sea ice and couldn't make its way through. Luckily for us this meant that we could have one more penguin trip. I like to think I had something to do with persuading Simon to organise the trip as I was the main person bugging him to do it.

This also allowed the some of the summer people to get to see the penguins, which is something they rarely get to do. One of the crazy things on this trip to windy cove was that when we got there, there were juvenile penguins actually on the ice-shelf. These curious little fellows had climbed up the slope right to the top. It was true that the slope had become shallower, but even so it was impressive. 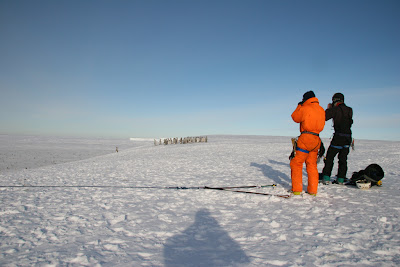 Anto and Ian the pilot snap away at the penguins at the top of the slope. 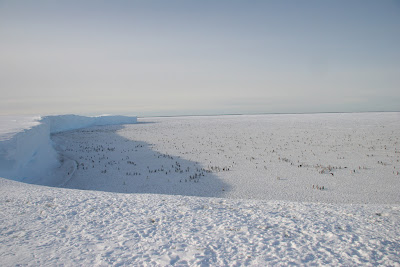 From the top we could see that the whole colony had dispersed. There were still loads of them but they were completely spread out. Very different from the two other times I had come. 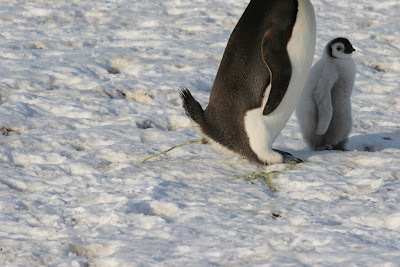 I also caught this adult going to the loo. 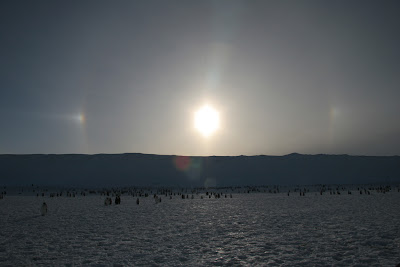 It was a pretty amazing evening, to be down on the sea-ice in only -5 degrees with sun dogs and penguins. It just reminded me how luckly I am to be here. 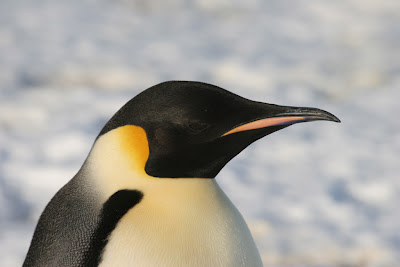 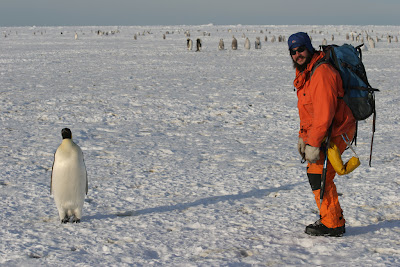 The adults are now the less flighty birds. And the chicks that used to be so curious and who used to wander right up to you are very very flighty. Here a returning mother wanders over to me. 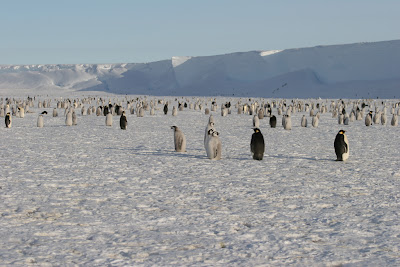 The chicks are also nearly as large as the parents. I much prefer them when they were tiny little things what were cute instead of the big ugly scardy cats that they are now. They are also starting to loose their feathers and so they look even worse. 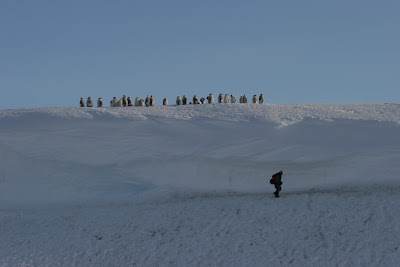 Fran walks underneath the chicks that made it to the top. 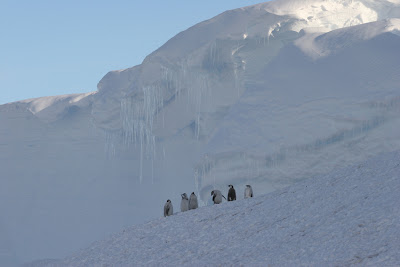 Some chicks hanging out under a cornice that is starting to thaw.

The trip to the penguins was amazing as usual. The ship was stuck in ice until new years eve when the wind finally changed and blew some of the ice out of the way. On base we had a subdued new year's celebration. As we knew that relief would happen the next day. At least we had a good christmas dinner and party where we played the samba drums again. The ship ended up being 8 days late which meant that the summer season was shorter and therefor busier. But that is another story for another entry. Hopefully will get an entry for January in very soon.

Hey Jules,
Well done for updating, like the photos!

You folks have an amazing life