Its been about 4 weeks since I got back from my prewinter trip (see last entry), which tells you something about how disorganised I am. Since the trip a lot has happened but I would have to say that less newsworthy stuff has happened. Sledge alpha as the name suggests was the first prewinter trip to take place and as there are 16 of us there were 4 more trips out. This has meant that during the week there have only been 12 of us about. The rules about winter trips are that people with similar jobs can't go on the same trips. This is because then there would be no one to cover all the jobs that have to be done on base. For example not all the electronic engineers can go on the same trip. This means that only one person from my science platform can go on a winter trip at a time. So we have been a man down on the platfrom for 3 weeks, then you have to factor in nights (we have one person on base on nights to be awake for alarms and to do the metrological observations throughout the night) and for us this mean that for 5 weeks we were missing people. Its mean a lot of covering other jobs which has been interesting but has prevented other work being done.

With all these missing people the place has felt slightly empty, and quite so when they come back on the weekend its usually a good opportunity to have a bit of a party. Immediately that we (sledge alpha) returned we had Frances' birthday party. For this she chose to theme it as a kids party. Everyone dressed up for it, and it seems that everyone enjoys dressing up, maybe some more than others. 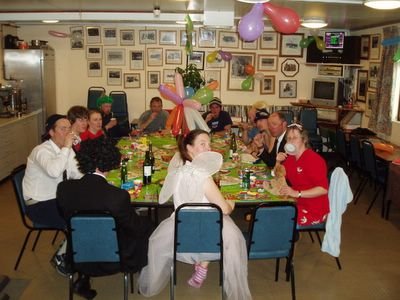 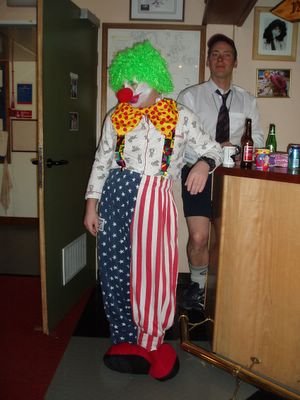 We played loads of games, including: musical chairs, pass the parcel, hit the pinata, pick up cardboard of the floor. A magician and this lovely clown also turned up for entertainment.

Its not all play and I got to go down into the Piggott tunnels for the first time. This was helping Bob the genny mech refuel the flubbers. These flubbers are big rubber tanks for the generators and they live in the tunnels. For some reason the Piggott tunnels have this amazing ice crystal formation at the warm platform end. The other colder end has no crystals at all. It must be something to do with warmer moist air getting into the tunnels. 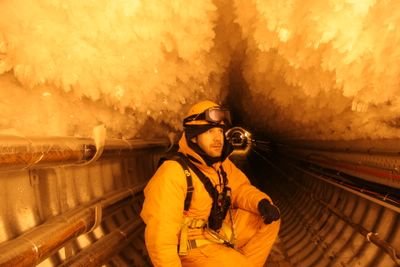 Bob poses for a photo at the scenic end of the piggott tunnels.

The actual job of refueling is not the most interesting if you are in the tunnels. If you're doing that job you just open and close valves and watch to make sure that everthing is ok. You then might dip the flubber to see how much is in there. 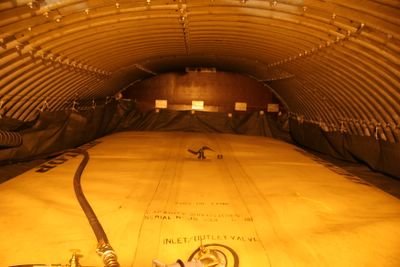 The flubbers deep under the ice hold gallons of avtur. Everyday fuel is pumped up to day tanks in the generator rooms for burning in the diesels.

The other job is on the surface about 25 meters above the flubbers where you have to crack open 44 gallon drums, and move a spout from a pump about. This is pretty good fun and good physical work. The other thing you get to do is drive dozers around. You need a dozer to drag the sledges with the drums about. So I have had the opportunity to drive two dozers about, the first was a D5 made by Caterpillar, an awesome machine with fingertip controls. So you have a foot brake, a decelerator (thats right not an accelerator) also foot operated. On your right you have a joystick that controls the blade (shovel thing on the front) and on the left you have a couple of small sticks that you operate with you first and second fingers, these brake the left and right tracks. Oh yeah you also have a hand throttle and a hand brake and gear selector. Anyway its great fun and easy to drive, the difficult bit is digging or using the blade. I can do it but it takes ages and I am rubbish, oh well. Hopefully I will get more opportunities to become a better dozer driver.

There was also a slumber party about three weeks ago. This was exclusively for girls, unless you made the effort to girly things, so I decided to do girly things. This was me just after finding the wig. 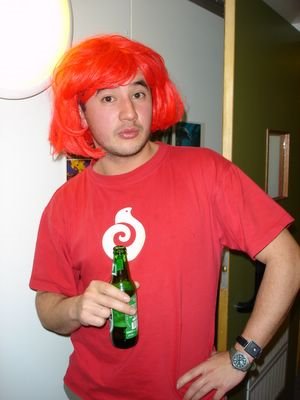 Me starting my transformation from Jules the dude. 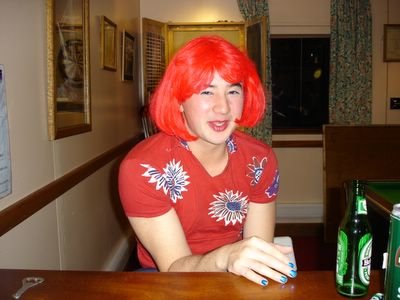 Until I was turned into Miss Julie, super babe.

As you can see we did a lot of makeup and all that sort of stuff, I don't understand it, but I can now say thank god I don't have to have to put on makeup everyday, its so difficult. I also think I might have scared the base a tiny bit. None of the other men dressed up and some of them were giving me dodgy looks, one was even eyeing me up. The girls seemed to enjoy it a lot.

Not only is there a lot of dressing up, but there is a lot of experimentation with hair. Since we don't have a hair dresser down here, we cut each others hair and since we are not going to see normal people for a year and in some cases two years you can shave your head and see how long it takes to grow back. Frances has started this process but only in her second year, so to start with she got a mowhawk. 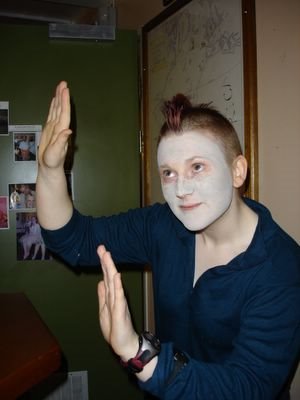 Fances practices her mime technique having applied her face mask.

She has since then shaved it back to grade zero. In order to do this another themed party was organised. 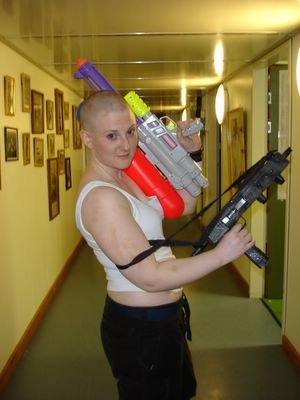 Frances cuts off all her hair so that she can be Ripley for Sci-Fi night.

I too have decided to shave my hair off, the idea being that a number of us will take pictures of ourselved everyday and make movies of our hair growing. Shaving my head gave me the opportunity to try to be Jean-Luc Piccard for Sci-fi night. 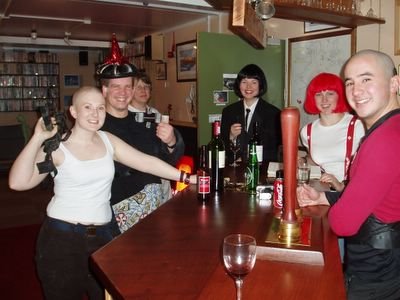 Frances, Dave, Nicola, Vicky, Kirsty and me getting ready for Sci-Fi dinner.

Dave was some sort of wierd alien with upside down clothes and two heads, Vicky was on the Men in Black people and Kirsty was Lilu from The Fifth Element. 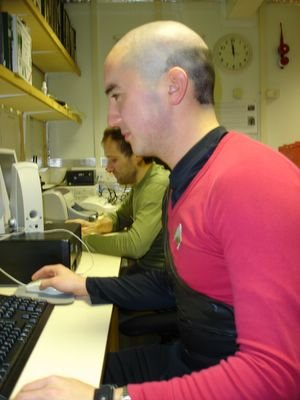 The day before Sci-fi night I went on nights. We need to have someone on base awake at all times in order to respond to emergencies. The main emergency being fire. The buildings contain a lot wood and everything is freeze dried to such and extent that normal fire proofing doesn't work so most things but burn very well once you get it lit. This is the main reason we have someone on nights. The person on nights also performs the metrological observations at night. Kirsty would like me to point out that she trained me, so if I made any mistakes you know who to blame. One of the bonuses of being on nights is that you might get to see some aurora. For me this happened on Sci-fi night. Everyone else had gone to bed and I was still wondering about in my Star trek uniform. I went outside to do the 3am met observation and suddenly there was wispy glowing cloud about. I woke up a few people and by the time they came out it was a bit rubbish. I don't think people appreciated being woken up. Later the aurora came back even stronger, once again I woke people up and once again when they came out it was a bit rubbish. Then 5 mins after they all left again and the few people who remained were presented with a massive display of the aurora australis. 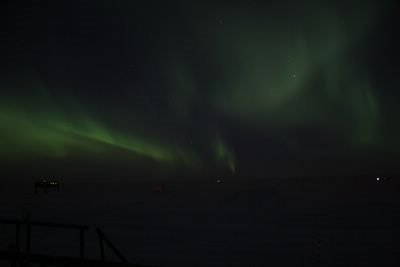 My first successful aurora shots, when I worked out you need a tripod. This photo is taken from (i am a girl, i like to wear dresses) the laws platform with an exposure of about 20 seconds. I needed a lot of help from kirsty taking this picture as I am a rubbish photographer. 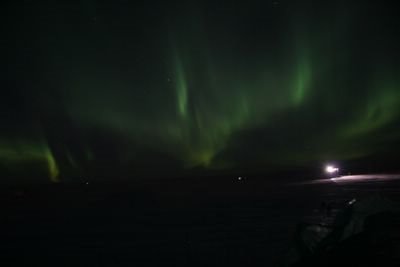 Another photo from the Laws, this time in the direction of the Piggott. 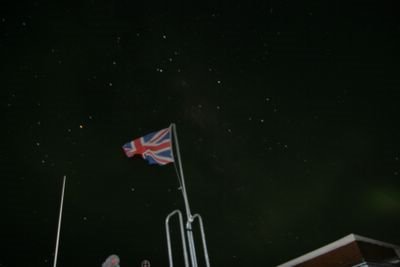 The tattered Union Jack above the base and the stars with a bit of aurora. 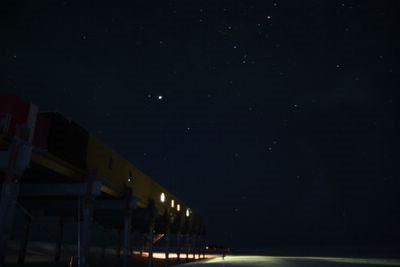 Stars and the Laws, my room is the furthest lit window. 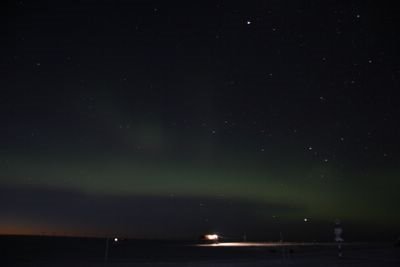 The stars and aurora in the direction of the piggott. You can see the Halley signpost in the foreground on the right.

These photos were taken over the next few days when the displays were not as vivid as the first night but they are still fairly awesome for me. Hopefully my next entry will include a photo of a pee funnel and news of my trip to Windy caboose.
Posted by Bigjuli at 7:01 pm

How many photos will you take for you to eventually see your hair growing? When will this be finished by?

You are quite brave and adventurous. And you really suit all your different disguises, you are just like Mr. Benn. I was feeling quite worried about you until I read about your shenanigans, it seems to be a lot of fun.

Look after yourself and be good,

u r gay it has now been proved

Who (ahem) is Alice?

Hello,
You look scarily convincing as a girl...
The aurora looks great though. And the cravasses...I can just see Moo climbing about in a cravasse, can't you- perhaps we should send her down to see you?!

Hello, Hello, Hello! I am off on the road to Morocco tomorrow. Am so excited and wanted to share it with you. Heaps of love, E

Is geoff_w a closet gay or something?

You do make a lovely girl love the colour of your hair very sporting of you to dress up.

Say you're right, is he more of a Jack or more of an Ennis?

Geoff W seems to be stealing your thunder here but please keep on writing Big Juli. I have nothing to read today.

with an aurora like that, I'm sure Julie can cope with losing a bit of thunder...

why are the interesting questions always left unanswered?

and, for that matter, who are Jack and Ennis?

You have a great Blog !

u love your self?