More appologies for my tardiness on the blog front, two weeks is really slack. My only excuse is that I have been too busy working and having fun, so sorry again but tough. I should have more time in the winter. I've been so busy because all the work here has to be done in the summer and the summer season here is drawing to a close. I think the ship is due back on the 23rd of this month and apparently it won't hang around. Basically all the summering staff will leave along with last year's winters and we (16 of us) will be left to fend for ourselves. The other thing that is happening is that I am being given more and more responsibilities which is good but gives me less time to do other stuff. I have been made Winter Mast Officer, this means that I am nominally in charge of all the masts here and have to write a report for HQ about their state. Its not really much as most of the masts will be maintained by others but I should know what I am doing. Because of this I am always being called on to help the Mast Erectors (Fish and Jacko) with Mast erection. Its good fun unless its really really cold. The other bit of responsibility is that I am going to be Winter Piggott Coordinator, which means that I am supposed to coordinate the Piggott Science platform, once again there is not much to do except help my platform communicate with the rest of the base and HQ but I need to know what is happening, which I don't at the moment. So what has been happening in the last two weeks?

A lot has been happening in the last two weeks. I guess the first thing that happened was that the Laws building was raised. This required everyone on base except for those involved with the plane or the chefs and one person running each of the science platforms. They need so many people because each leg of the building (20 of them labled east 1-10 and west 1-10) needed two people to run the jacks and raise the jacking plates. I was on the west side with Jeff Cohen the passive engineer (passive engineers are not passive but deal will all the passive instruments, I will taking over half of his jobs). There are about 50 people on base so the other 5 or six people were coordinating stuff on the ground. It was a pretty long day and very cold as we stood around for ages waiting for things to happen. Apparently it might be the last time they ever jack the building as Halley 5 is due to be removed and replaced by Halley 6. We have actually had the Halley 6 architect and some engineers here testing things and changing their design. So the laws got raised 1.7 m.

The next day the AIS transmitter masts were raised. These are the tallest erections in Antarctica and are 46.3m above the snow surface after they were raised this year. There are two masts that hold a Log-Periodic antenna curtain between thenm. Because they are so high, raising them took two days. The mast erectors Fish and Jacko took it turns to climb the masts and Bryn and were the other climbers. I think I have mentioned before that Bryn is the old AIS engineer and that I am taking over from him. On the first day Fish and Bryn climbed the west mast. 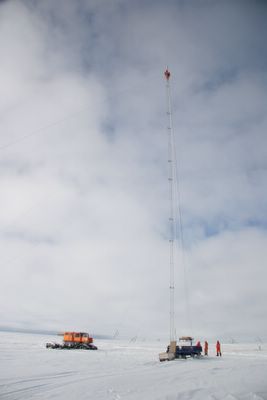 The AIS masts with Bryn and Fish at the top. The snocat on the left is K21, the dream teams relief snocat (see previous entries). 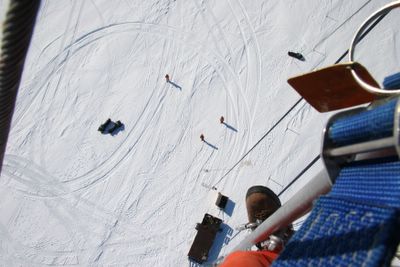 The view looking down from the top. The smallest blobs are people, the next size up blobs are skidoos and the largest blogs are sledges. 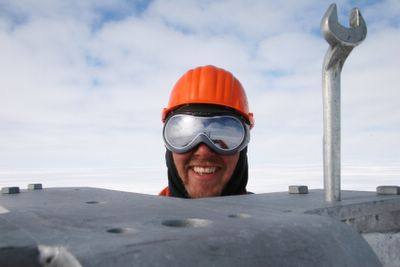 Jacko the mast erector at the top. The spanner thing on the right is called a podger and has a tapered handle. Podgers are really useful for locating holes and tightening the nuts afterwards. Dropping stuff at 45 m is not good.

Once you have raised both masts you can raise the antenna curtain again. Raising the curtain was a bit of pain as the antenna had to be checked as it was raised and there was a bit of damage between insulators and the dipole wires but wwe fixed everything and it all worked well later. While we were doing all this work other people were invited to climb the masts as it is not often that you get an opportunity to climb them (they are transmitting a lot of the time with 10kW pulses 250 times a minute at wavelengths about the same size as a large human). Only one person apart from Bryn, Fish, Jacko and Me got to climb and that was Kirsty. She was just lucky and was there when we weren't too busy. So she is only spectator to have been up the largest constructions in antarctic this summer.

The rest of the week was spent helping the masties with raising turnbuckles. Snow accumulation causes most of the work here. I also started to prepare for the weekend away. This was an idea I had about a week before when I heard that some of the current winterers were going to a holiday caboose for the weekend. They did it and said that it was a lot of fun. Others were going and I thought instead that it would be good to get off base for a day trip. So I organised with the GA (Simon H.) to make it possible. In order to leave base, you need to have done co-pilot training and you need to take a half unit. A half unit is a small unit and a full unit is all the safety equipment that you need to take with you if you are planning on sleeping out it a tent. A half unit consists of Pots box (pots, pans, primus, tilley), spares box (plates etc...), inside tent box (loo roll and more stuff), radio box (has an HF radio), man food box (contains enough food for 2 for 20 days), P-bags these are massive bags with sleeping bags, thermorests, sheepskins and other bedding that normally makes it too hot to sleep and an iridium phone, rescue sack (we didn't take one as we were travelling along a drum line but this normally contains ropes, ice axes etc... for crevass rescues)... um oh yeah you need a jerry of parafin and some meths. A half unit is massive and a full unit is even more. So I did a small amount of stressing trying to locate all the bits and bobs and orgainise the rest of the crew. The crew turned out to be Liz, Kirsty, Anto and Me of course. It got to sunday and we as usual there were some late risers. We located the equipment and loaded up snocat with all the stuff. When you shove that much stuff in a snocat you feel like you are going on a massive journey, so the day trip did feel a bit weird. 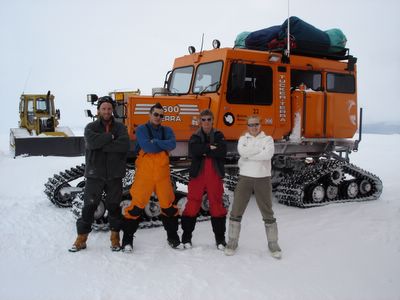 Anto, me, Liz and Kirsty get ready to leave for Windy Caboose in the Star Ship Enterprise.

The trip only took about one hour at 20 km/h but for me it was great to be back in a cat, this being the first time I had been in one since the relief. It was great and when we got there Liz brewed up, which was fantastic. We got there at about lunch time and ate our picnic. 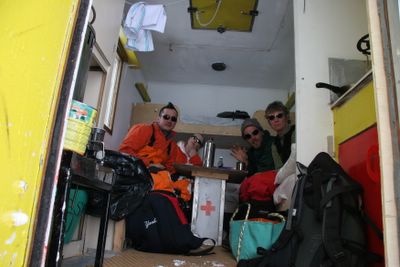 The team inside Windy Caboose.

We then had a bit of fun kiting next to the drum line and having a snowball fight. 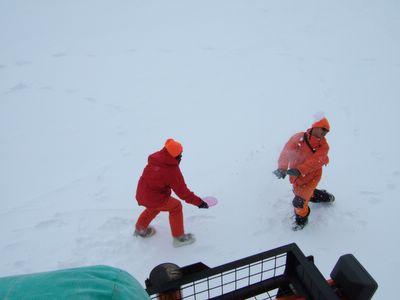 Snow ball fight at windy caboose, Kirsty of course cheats by using a frisbee to hurl snow at me. Action shot from Liz the chippie taken from the top of the snocat.

We had dinner at the caboose as well. This time it was a slightly different meal, with tinned hotdogs, and tinned spagetti which turned into a bit of a mush. We drove back and arrived back on base at about 10 pm. What a perfect day!

Another week started and we got some great weather again. One of the highlights apart from the great weather and hence skijouring etc..., was the arrival and departure of the Germans. The Germans base to the east of us on the Ekstrøm Ice Shelf is called Neumayer and they have only one plane. They used to have two but they crashed one at Rothera a couple of years ago. The plane is a Dornier Do 228 and looks pretty aggressive when compared to the twin otter. 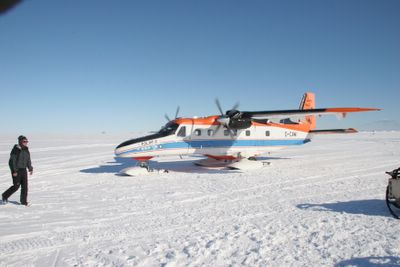 The Germans in the Dornier preparing to leave. 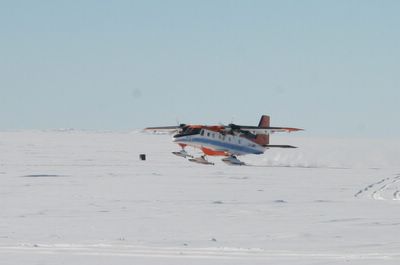 The Germans just leaving the ice

Neumayer base has a shorter summer season so while we are still doing things their one plane is leaving, refueling here and carrying on to Rothera. So at Neumayer they are going into winter mode. Which reminds me we are going to have to go to winter mode soon, I've mentioned that before haven't I. Anyway the weather has since got fresher and we are regularly having days when it is 20 below in the evening. The fresher wind makes it good for kiting. 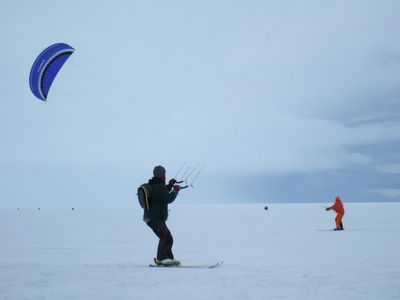 Anto and Me kiting. My kite is the blue one and its 9.5 square metres large. 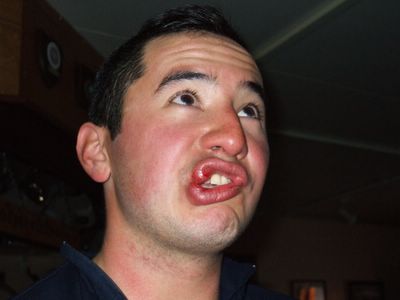 Me with my first kiting injury. How disgusting is that? The control bar for the kite smacked into my lip which then got cut up by my teeth. Vicky the doc said I it was fine and that I was a wuss.

If the wind changes your face will stay like that

I heard that in antarctica the frisbee rule doesn't count

Did you boldly go where no man has gone before?

We don't need to bother looking for the aliens!

you can never have too many podgers

I love my podger

Jules man, stop apologising! We know you are a busy man and to be honest, if you posted every day it would be difficult to keep up with. My only complaint, otherwise an awsome blog! I am very jealous and it seems u are enjoying it. Any sign of those navy boys? They live at Rothera which is a bit of a trek I know but they fly around abit so I wondered if they had delivered to you? Take it easy amigo, Rod