As usual my blogging plans are never as good as they should be and as usual my blog is way out of date. Everyone else here seems to have the time to blog. I like to think that I am just busier than everyone else. Of course this can't be 100% true. My new plan is to try to at least keep up with what has been happening and then retrospectively catch up on stuff that I missed since the last entry (January). This of course is still likely to fail but I will try my best. So keep looking back because new entries may appear after this one at a later date.

So what has been happening recently? I guess the most significant thing for us is that the sun has gone again. At Halley we have approximately 105 days without the sun. This isn't to say that there is no light, there is alway light. But what does happen is that we don't get to see the actual sun for that time, we just get a glow that appears on the horizon. As is traditional at Halley we have a sundown ceremony where the oldest member of the base lowers the flag. Then in the evening we have a sun related party. Somehow every year there are arguements about when sundown actually is. This is because there are a number of optical instruments here and they all use different definitions of when the sun is actually down. Then of course there is miraging which will can cause the sun to appear above the horizon when it actually isn't. Anyway it is a good excuse for a party. 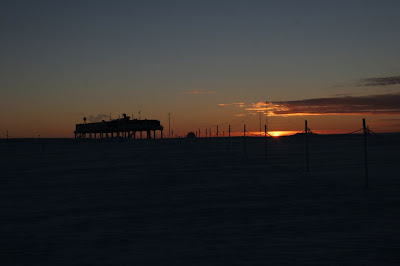 The laws platform taken whilst walking to lunch just before the sundown ceremony. 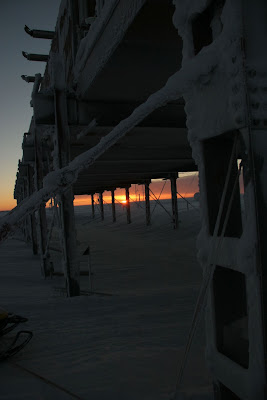 A view of the sun at 2pm about 10mins before the flag was lowered. 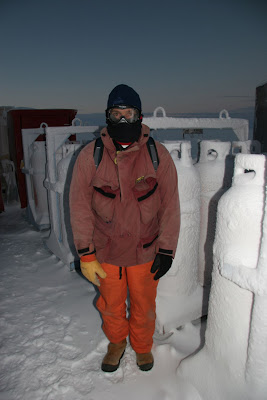 Chris stands to attention as we wait for everyone to gather on the laws open platform. 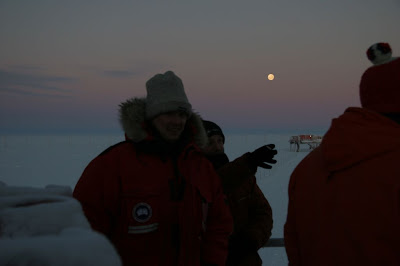 Mark and Brian wait at the back. What was really nice on that day was the lovely moon over the Piggott platform. 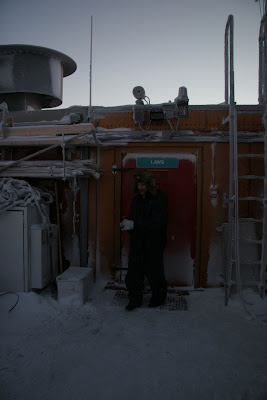 Jim the Chippy (and the youngest on base, who will be raising the new flag at sun-up) finally makes it. He had a good excuse in that he was on nights but got up specially for the ceremony. 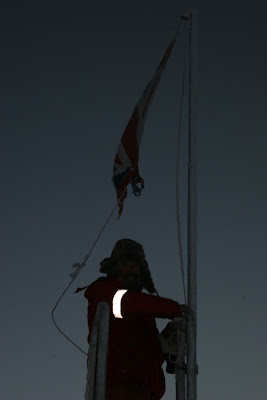 This year it turned out that our Winter Base Commander, Pete, was the oldest on base and had the honour of lowering the flag. He gave us a lovely short speach before the lowering in which he revealed that he would be celebrating his 50th birthday. He did a fine job. 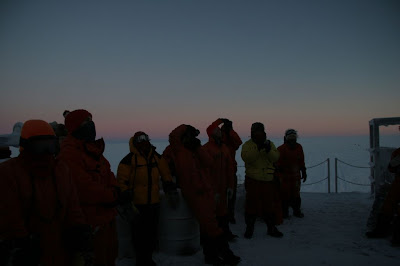 I then wondered back to work this time taking a few photos. 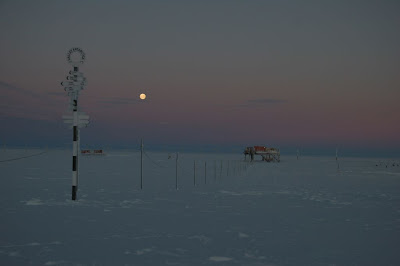 It just amazing the sort of colours you get because of the low sun. The moon as well was awesome.

That day I had to carry on working hard trying to get the new MF radar working again. This radar is located in the optical caboose about 1.5km from the rest of base. Now that winter has really started properly we walk most places because it is more hassle to get a skidoo started and these are all at the garage getting serviced for the next summer. Luckily its a very nice walk (unless you have a load of equipment to drag) especially on a beautiful days. 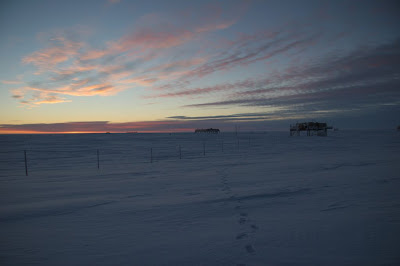 The view of the base about half way to the optical caboose. The small building in the foreground is the piggot and the larger one in the background is the Laws.

The radar that I have spent a lot of time fixing is the newest radar on base. It has buried antennae. It seems that a lot of my maintenance on this radar is to compensate for the changes in snow properties as it builds up and compacts above the antennae. The properties change and therefore the tuning of the antennae changes. This change is really bad for the radar and we get a lot of energy reflected back into the transmitters. This results in blown up components and overheating. 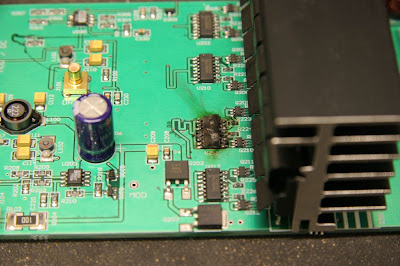 One of the chips on one of the Power Amplifier cards that has blown up.

Hopefully I will have got the MF radar running alot better as I understand it more and more.

I have also been spending a lot of my time making my mid winter present. This is taking up all my spare time but I am starting to believe that it might just work. Not long now either. Mid-winter is less than 6 weeks away so I have to get working. My idea this year is very different from last year and I think one of my problems is that my idea last year was so good. I couldn't do the same thing (it would not be that exciting for me) and so I have gone a little crazy. I hope it will work.

I also realise I haven't been very good at keeping in touch with people this year. So from now on I will be making more of an effort to write my blog and also get back in contact with other people. Give me a call if you know my number.
Posted by Bigjuli at 2:27 pm

You need a radar to find the snow? Is MF the actual designation or is that your angry name for it?

The radar is to look at the ionospheric wind. This is important for aurora stuff and how the sun affects the earth. The MF stands for Medium frequency which is low about 3MHz. FM radio works at about 100MHz.

Hi Julius, could you remind me of your and Brians extension. Your last years winter present has recently arrived in its new home intacted. All who have seen it are very impressed.
Anto