As I mentioned in the last entry, I went on my post winter trip. It was great to get off base and we had a few amazing days. The one thing that we didn't get to do was get to go and see the penguins at Windy cove (see map), this was because the weather was bad. There was also a thought that we had already all seen the penguins at least once so it wasn't a priority. Having got back from the trip we realised that we really hadn't seen the penguins since the chicks have been hatched. So for a couple of weeks I had been wanting to go on another penguin trip. Most of the time when we go off base we go with the Field GA, Simon. Now that the post winter trips are in full flow he spends most of his time off base. Because of this he nominated people to stand in his place. Its actually more complicated than that, he decided that there were some people who were good at the rope work and climbing up and down and that others were better at being responsible and deciding if it was ok to go down onto the sea ice. As long as a penguin trip has at least one of the rope experts and one responsible person you can go. I happened to be one of the rope experts.

Once again the weather proved to be a decisive factor and for nearly two weeks we waited. Then the next weekend looked good for a penguin trip. Bob, the genny mech, Liz, Kirsty and me got organised and started to get everything together for the sunday. The weather then took a turn for the worse and John the Winter BC decided that if we worked on the sunday raising the 4K marker we could go to the penguins on the monday. 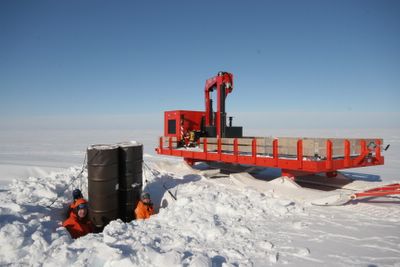 The 4K marker before we pulled it out and repositioned it. The marker is 6 avtur drums welded together and is used by the planes to help them find the skiway. They can use their radar to find the drums and then take a magnetic bearing from there. The sledge behind is a glomaxs sledge with a Fasi crane on the back. We didn't actually need the sledge but took it just in case. Photo courtesy of Bob

From the base you can normally see the 4K marker unless the weather is bad, as we had to move the marker closer we decided to test our GPS skills and navigate to the marker using last years GPS reading. What was quite interesting was that using the GPS was fairly easy but that last years GPS reading was 450m out. We then remembered that of course we are on a floating ice shelf that is flowing so of course the old reading will be out. So it seems that since the last GPS reading of the marker, it and the whole base has moved about 450m. As you can see from the above photo the years accumulation is pretty large. You can also see the amount of snow that we shifted. It wasn't too bad and at one point we thought there were another set of drums lower down which would have made it very difficult. In the end we could push the drums ove, we then attached a sling to the top and dragged them out of the hole. We repositioned the marker so that it was exactly 4km from the Laws building. We then pushed it upright, dug holes and burried some dead men (lumps of wood to attach guys to) and attached some new guy ropes. 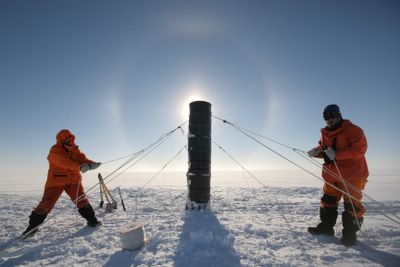 The 4K marker in its new position. Liz and I tighten up the stays while Bob took this picture with the sun halo behind. Photo courtesy of Bob 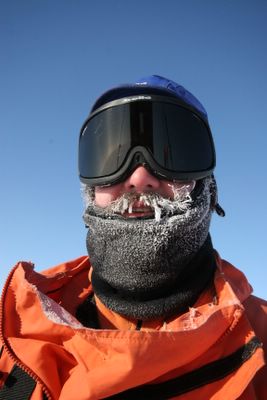 Me after finishing tidying up. As you can see the warmth advantages of having a moustach and beard are somewhat offset by having moustachticles and having your balaclava frozen to you hairs. It looks cool though. Photo courtesy of Bob.

The next day the weather had settled down and we set off for Windy cove for our penguin trip. The trip was pretty uneventful, but somehow more relaxed than previous trips, maybe because we had got everything ready the day before or maybe because we were on our own and could set our own pace.

The trip there was uneventful except for the fact it felt more like a holiday down to the coast instead of a fieldtrip to the zoo. Once again I think this was due to the fact that we were on our own. Once we got to windy we relaxed a while got our selves kitted out in the warmth of the snocat. We then roped up as usual and made our way down to the abseil point. Since we had last been down there the abseil point had changed quite a bit. The whole thing had sort of slumped. Of course as the rope expert I was leading the group and the most likely person to fall into a crevass is the person at the front.

We got to the abseil point and as we couldn't see over the edge we decided that I would abseil out on a short bit of rope (we were still roped up) and down a little bit to see if it was good. Of course there might be no nice ramp down to the ice and by abseiling out onto a cornice I was putting myself in danger. I abseiled out and realised that I didn't have enough rope and I still couldn't see if there was a drop into nothing or a nice bank of snow that would be easy to climb up. So in the end I climbed back up and we looked at the abseil point from the a promontary to the west. This is truely walking in an unmarked unexplored area and its very scary when you are not with a trained GA. We survived and got a good view of the abseil point which turned out to be perfect. We then made our way back and all of us quickly made it down to the sea ice.

On arriving at the sea ice some penguins immediately came and greeted us. It was amazing. We wandered past these and headed for the first big group. When we first came here all the penguins were all huddled in one group about 1 1/2 km away from the abseil point. The colony had now split apart into about three groups and had got bigger, probably because the mothers were back. Once we were fairly close the birds just came to us. 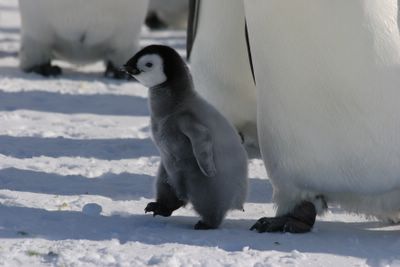 One of the first chicks that waddled over to us. 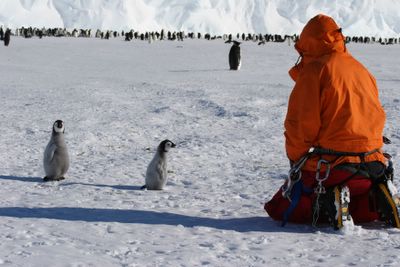 They really seemed to like Liz, and these two wandered right up to her until a couple of adults decided that the kids were getting too curious. 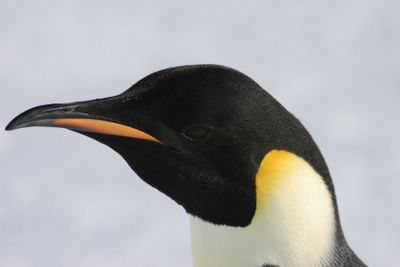 You get so carried away by how cute the chicks are that you forget how lovely the adults are as well. 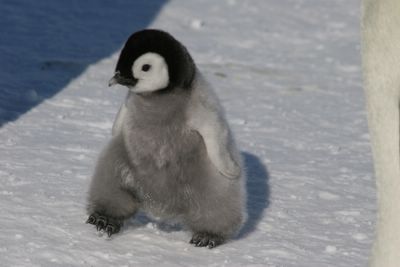 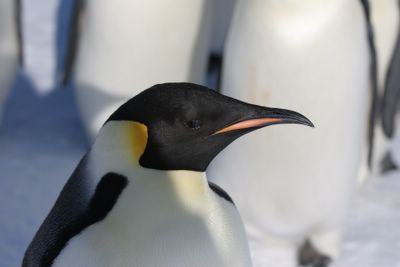 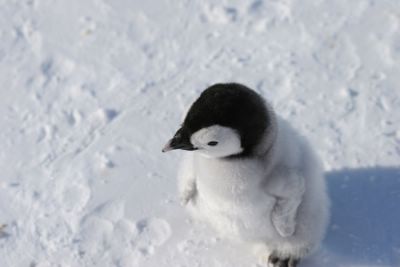 This one wandered right up to me and was probably only 30cm from my boot when it decided to stop. I got a few photos off and then my battery died on the camera, which is typical. Instead I was just at one with the chick and I like to think we shared a moment.

Anyway we had a fantastic day down with the penguins and after a few hours down there we made our way back up. Once again it was a bit scary doing all this without an expert about. We got back after what seemed a perfect day.

A few days after the penguin trip I helped Anto the vehicle mechanic start the long defrosting and servicing that he has to perform on all the vehicles that have been laid up for the winter. 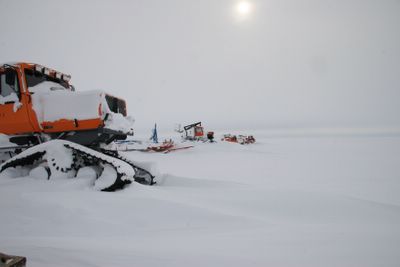 The winter vehicle line. All the vehicles were originally placed on mounds about 1.5m above the snow surface. After the winter there are no more mounds and most of the tracks of the vehicles are covered.

The first thing we did was replace the batteries. Once these were replaced we removed as much snow as we could from the engine and turned on the webasto engine preheaters. These run on avtur like the vehicles and heat up the coolant which in turn heats up the engine. Once this is done and the engine is heating we dug out the rest of the vehicle. 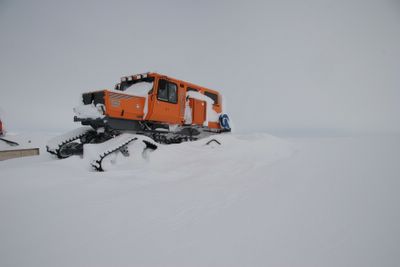 K21, as you can see the job of digging it out and getting it going is a bit more involved than getting the car out of the garage.

Once the engine has been heating for about an hour and there is no snow in delicate places like the radiator fan, we started them up and surprisingly they fired very easily. Not bad for a vehicle that has been frozen for 10 months. We then rocked them backwards and forward to free the tracks. It took us the whole afternoon to get two vehicles out. But it was very satisfying at the end of the day. With the vehicles returning the preparations for summer are starting. 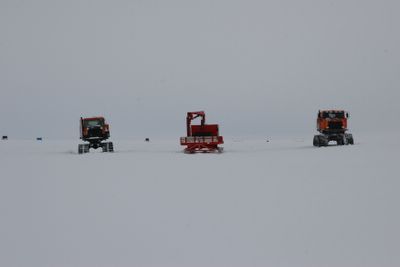 The end result K16, the Fassi crane sledge and K21 in the normal summer sledge line.

The summer is returning and we have loads of work to do to get the place ready for the summer season. Its also scary that there are going to be all these new people arriving. We now know who is coming down and we have been sent photos of them from their conference in Cambridge. 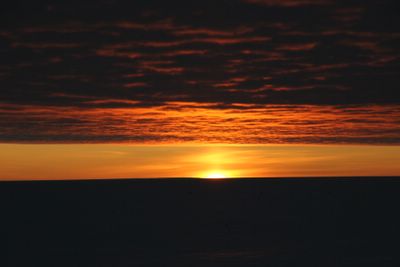 One of the fantastic sunsets that we have enjoyed. It seems to happen when we have this particular type of cloud.

Next entry I hope to get some video of the penguins up.
Posted by Bigjuli at 7:08 pm

What little cuties those baby penguins are! i've saved one of the photos on my desktop so that i can admire their pudgy furry feet. hope you're well - looks like the sun is well and truly up over there (while it's getting darker and darker over here....) - Georgia x

These latest penguin photos are your best work yet. The facial pubes are your worst. Chur

If the world were as beautiful as your world is then we would all be happy and blessed in the eyes of the Lord.

Hi Julius. I just wanted to leave a comment and tell you how much I enjoy your blog and your photo's You have such an interesting job. I always look forward to your next post!

hi Jules,
At last the video, brilliant. Glad to see you change your clothes on a daily basis.bye for now and thanks again for february.x

Hi Julius!!!
Great to see your face again, ( I love the beard movie!) and blown away by where you have ended up! Fantastic! Never done this blog stuff before, Africa is still Africa y'know, so just a quick note to say hi, welldone, you are walking on a beautiful path. Shine on! Lots of love, Malaika