Here's the sun. Finally after more than 107 days (for me because I was on nights immediately after sun up) I got to see the sun. I had just come off nights and looked out of the rear window on the Laws platform just after lunch and got blinded. You forget how bright it is. Throughout winter it was dark, but even at midwinter there was a glimmer of red on the northern horizon. It then gradually got lighter and lighter but when the sun actually rises it is so incredibly bright, we have also probably forgotten not to look directly at the sun. I ran and got my camera. 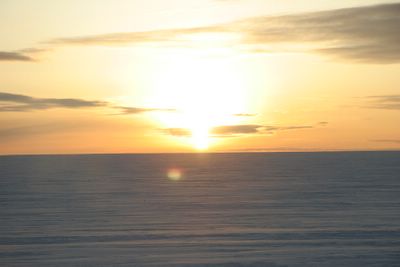 My first view of the sun after on the friday after my nights finished. This was the view out of the back door of the Laws just after 2pm. I know it doesn't look like it but the sun was incredibly bright.

I then went outside and wandered around looking at shadows. If look closely at the next photo (click on it) then you can see my shadow on the right hand side of the Laws building, its probably the length of the building on the snow because of the low sun angle. 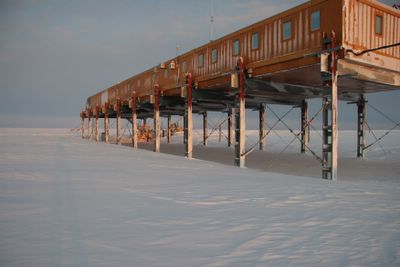 A view of the Laws platform on friday after nights. You can see the Dozer under laws with a sledge attached. This is because there is a gash run every other friday to remove rubbish from the platform.

I think I then started to get a little giddy with excitement at seeing the sun that I tried to get some artistic shots. I didn't expect to miss it that much and maybe in reality I didn't miss it but it is really nice to see the sun again. 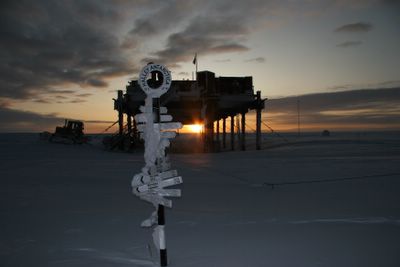 The Halley signpost with the Laws and the sun in the background.

Of course now the sun is really annoying. Annoying because it is too bright and we now have to go back to wearing our tinted goggles and sunglasses and if you look in the wrong direction you get blinded by the sun reflecting off the snow. We have even had to pull down the blinds to look at the computer screens. Overall the sun is better than no sun. And the sun returns extremely
fast. From sun up (10th of August) until 24 hour daylight (29th of October) is not very long.

With the return of the sun the weather has got worse, something to so with more heating of the air. So we have had a lot of cold windy days. We seem to have very few days when we can do outdoor work. So things such as mast maintenance, or fixing or raising equipment outside has sort of piled up. On the rare good day we just try to get as much done as possible because we don't know when it will be good again.

One of the interesting things that has happened is the erection of a weather haven (big tent) to serve as a blimp hanger. A load of us helped build the weather haven and then the Simpson team filled up their blimp. 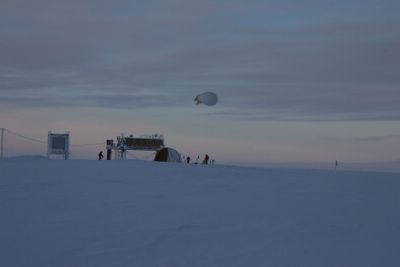 The first attempt at flying the blimp. The Simpson team launch the blimp to try to measure tropospheric ozone levels when there is an Ozone Depletion Event (ODE) caused by newly forming sea ice. You can see that the tail of the blimp was a bit flaccid for this attempt. 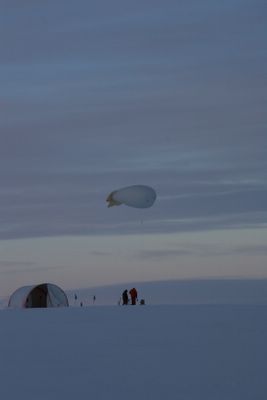 Another photo of the Blimp being launched for the first time. Its pretty cold work as they have to let it rise to 500m at about 5m/minute and then they have to bring it slowly back down. All this time they are standing out is the freezing temperatures checking the winches. I helped them once and it was nithering

So every now and again an alarm goes off and the Simpson team have to fill the blimp and get it raised. As I mentioned earlier the tropospheric ozone (low level bad ozone) is depleted when sea ice forms, so when the wind has swung around from its usual easterly direction to a westerly, it brings a packet of air that has been sitting over Precious Bay (in the Weddell Sea) where there is a polyna (russian word describing area of open water surrounded by ice) for some reason and sea ice forming. The alarm is triggered by ozone monitors near the ground at the CASlab (Clean Air Sector laboratory). The blimp flights give the scientists back in Cambridge a profile of the ozone levels at different heights.

For me its mainly been routine maintenance work, this consists of fixing antennas that have snapped in the wind. Just checking that the instruments are doing what they are meant to be doing. Refocusing the optical experiments. One of the things that the light and occasional good weather day has meant that outdoor jobs are carried out. As mast officer I have to check all the masts we have on base. These masts (varying from 5m cable gateway masts to the 45m AIS masts) are built on the unstable ice. One of the things that happens is that the snow accumulation builds up and this compresses the snow which in turn tightens the stays. So we go around every few weeks and loosen the stays, this is done by undoing the turnbuckles. Sometimes there is so much accumulation that we have to raise the turnbuckles. Now that there is enough light and I can see the top of the 45m masts and I can also check them for straightness. The straightness doesn't affect the AIS much but potentially the mast can lean too much that its not safe enough to climb and therefore you can repair things on the mast or the mast might even fall down. 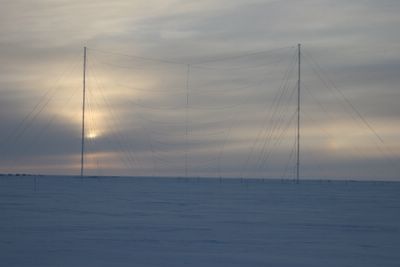 The AIS masts are still standing which is good. I got around to surveying them with a theodolite. I found that they were both pretty straight. 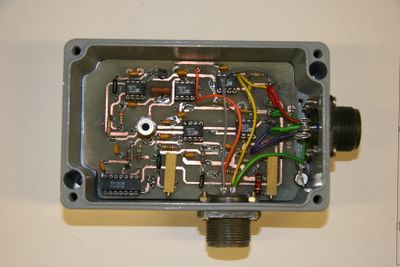 One of my winter projects. To make a cloud monitor, simply an infra-red detector that can measure the temperature of the sky. The idea being that clouds are warmer than no clouds.

So this is pretty much my the first circuit board that I have etched. Its all very interesting.

There has also been the birth of the Halley running club. This came about because I had heard that many of my friends back in England were running a half marathon. And after a few discussions it was decided that we might try to have a Halley Half Marathon. A lot of us then got down to training in the gym and for a few weeks it was in constant use. Then the light arrived and we started to think about running outside on the snow. 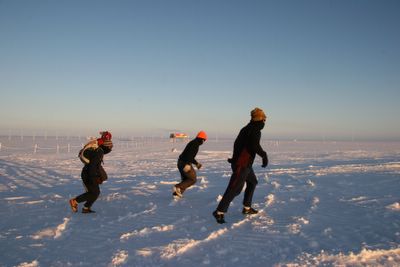 Setting off for our first freezing training run. All of us got cold bits. We nearly ran around the whole perimeter, about 5km. The temperature was about -35, but we felt warm most of the time until the last section where we were running into the wind. Dave (leading in photo) and I (second in photo) got frozen bellies and Liz and Vicki (following) got cold thighs. Apparently you get cold where you have the most fat.

Having run around on the snow and taken into account how cold it is, we have revised our plans and have decided to on run a 10km. Running the snow is like running in sand and the 10km will take us about 2 hours by which time we will start to freeze. The 10km is quite good because its about the distance from creek 2 (gin bottle creeks) where there is a caboose. So the idea now is to run back from creek 2.

We have also started our preparations for my post winter trip. I am going out on the first and therefore coldest trip with the same people that I went on my first trip, that is Liz, Simon and Kirsty and this time we shall be called something like sledge foxtrot or something beginning with f. I should be off base from the 18th until the 28th of September. 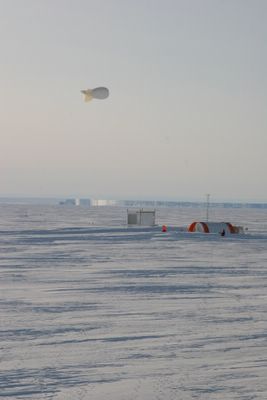 Another Blimp flight. This time tail of the blimp is more turgid. In the background you can see the miraging of the ice-shelf and the icebergs near the Rumples. This is where I should be heading out for my post winter trip.

Hopefully I will have some photos of the trip soon.
Posted by Bigjuli at 2:40 pm

We had a one-day ozone depletion event over NZ last Sunday (24th), was this measured by the good people at Halley Base? Do you go for runs because you have become fat and inactive over the winter? It looks like it. Exactly how straight are the masts - how much did they move over winter and how does this affect the experiments?

Happy birthday. Your use of flaccid and turgid is gay.

Geoff- Ozone.
Our blimp measures tropospheric ozone (ie. ground ozone that we breath). Ozone at this level is 'bad ozone'. It's not good for us. An ODE is normally caused by local sea-ice forming and destroying the ozone in the air. The ozone depleted air is only 50m or so thick.
What I think you are talking about isn't an ODE. It's a tongue of the ozone hole that's over Antarctica that will sometimes branch off over Sth America and New Zealand. This is stratospheric ozone (10 to 50km) and is 'good ozone'. We also meausre that here. The ozone hole (<220DU) is at it's largest at this time of year and should repair itself to normal levels (300DU) by December.

Cool thank you, you are much better at replying to technical questions than Juliarse.

Hello again my friends:
I would like to send you a gift and a present. The gift is in sharing how to make a tree and the present is in receiving one. If you email me, (found in my profile) I would very much like to send you one of my pieces (free of charge to you) that I may have my art on every continent on the face of the earth.
your humble servant,
Ancient Clown

I cannot believe that I fell upon your 'blog'... I also go back to it every now and again... I start to wish that I were down there doing whatever it is you do down there... dammed I will study who the icicles form if I have to just so I could go down there. I am an Australian living in Florida. Back in Australia they were building a boat of some kind to go down to Antartica and when I would see it being built I would wish that it were me going down there... alas... I guess I will never get there... so, I have come to the point where I am living this crazy dream through you... haha... Take care and look forward to reading more about life way, way South. Felicity
http://flissandmikeadventures.blogspot.com/
I have to put that address there... it isn't working on the actual blog! Oh well...