We are all finally getting back into the swing of things after an excellent semi-relaxing week off for midwinter. Of course the lead up to midwinter was very very hectic as everyone got down to finishing off or starting and then finishing off their midwinter presents. At the beginning of winter, at our first sit down meal (actually here) we all picked out a name from a hat to decide who you would make you midwinter present. So for about 4 weeks before midwinter I spent nearly every evening making mine. We did have one party to releave our stress. This was Fids night. Fids are members of the Falkland Islands Dependency Survey and this was the old name for BAS . Anyway we all tried to grow beards (I dont' think the girls did) and then dressed up in our finest old fashioned clothes. 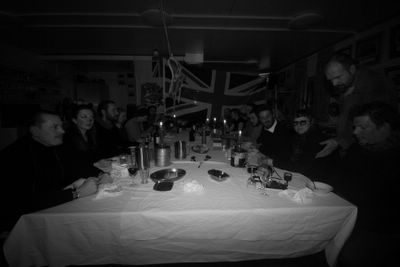 Fids night. We tried to recreate a famous antarctic photo (by Frank Hurley) and also try to show off our beards.

As midwinter approached more and more we expect the darkness to completely descend. I mean the sun disappeared over the horizon over a month ago and it still hasn't got completely dark. That whole thing about 105 days without the sun is true but you still have light. Well just a little on the horizon. I don't actually use a torch except when I am going into a container or working on something outside and I actually have to see well. Most of the time you can stumble about and head in towards the lights on the buildings. 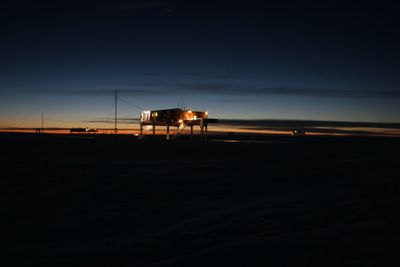 The Piggott platform taken close to local noon on the 12th of June, thats nine days before mid-winter and we still have a lot of light.

Because it is dark I haven't been able to get out and safely kite, I did try about a month before midwinter but I could hardly see anything and the sastrugi was huge which made me fall over to easily. Maybe I have lost my touch. Because we can't get out so much we have to occupy ourselves indoors a lot more. This is good because we had to do our midwinter presents. The countdown to midwinter sped up and the present making became frantic. You have to remember that midwinter is like christmas (we actually missed proper christmas because of relief) and you get the same christmas rush. I have also done a few other things apart from present making. I gave blood, having passed out last time after 5 mins of digging in my arm Kirsty and I went to the surgery to take each others blood. Kirsty couldn't find my vein so in the end Vicki the Doc just used a syringe and got some blood. I then took Kirsty's blood. There wasn't any fainting which was good. I've finished watching all episodes of star trek enterprise, thats 4 seasons of trekkie stuff. The world cup has hit us and we are constantly talking about it and although we can't watch the games we listen to them through the internet.

Then all of a sudden midwinter was upon us. We had a week off which was good and things were organised everyday. The first of which was film day. We all wrote down some films to generate a list of films that we wanted to watch. We then voted on for 5 films. In the end we watched: Its a wonderful life, To kill a mocking bird, The life of Brian, A very long engagement and The muppet's christmas carol. 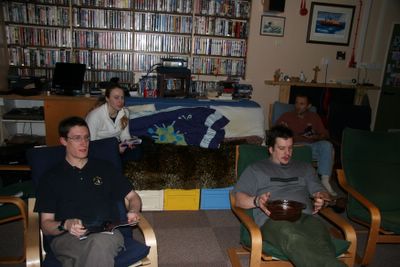 Alex, Kirsty, Dave (cleaning a bowl of chocolate sauce) and Chris get ready to watch another film. Note the large video collection and the digital projector behind the leopard skin sofa.

We also played darts against King Edward Point at South Georgia and lost. I think they were cheating because we played with the whole base (16 of us) taking it in turns to throw out arrows, but they played with two people only in each game which means they got more board time and hence won. Anyway they are not really in the Antarctic being north of the arctic circle.

We had a quiz night, which somehow Kirsty and I won. Kirsty was very excited because it is the one time in her life that she has won a quiz. Well she thinks it is.

On midwinters day itself John the winter base commander delivered drinks in the morning to our rooms. And then cooked us brunch. The next thing that happened was the traditional midwinter's run. This is a naked run around the Laws building. The girls put us to shame by organising themselves and then running around before any of the boys had any idea what was going on. They actually did it before brunch. The boys (only four of us) then got ourselves together and performed our duty nearer 2pm. I did the run twice. 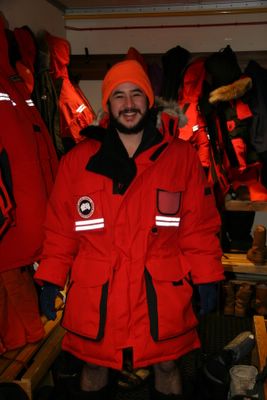 Me just before my first midwinter run. 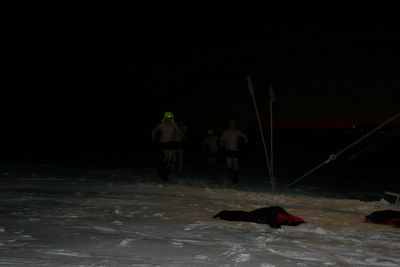 The midwinter run around the Laws platform. 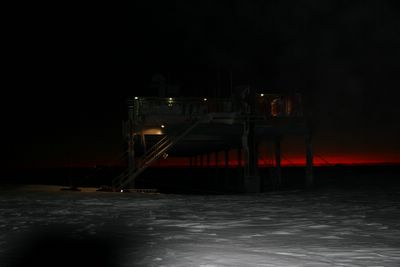 The light around the Laws on midwinter's day during the naked run at 13.44 GMT (local noon is at approx 13.45 GMT, the temperature was -38 degrees.

All I can say is that it was freezing and all your extremeties feel it (all of them). The second thing you feel a lot is that your breathing is really difficult and so you get about half way around and you just want to stop and sit down except that you know that would be a bad idea. So you have to keep going but your chest feels like it is about to implode. When you get back it the warm air sort of burns and you get the burning feeling on your skin similar to when you fall into an ice cold pond and then get into a hot shower.

The rest of day was spent getting warm again, finishing off the presents and wrapping them to be placed under the christmas tree. 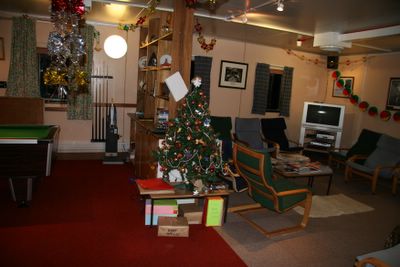 The presents starting to accumlate underneath the christmas tree.

An amazing dinner was served at 7pm: 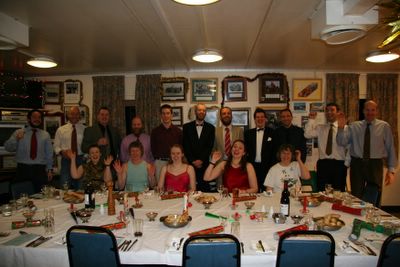 We happy few, just before our midwinter meal.

I especially liked the spicy prawns, the deep fried camembert, the duck, the beouf en croute. We had so much food that I was the only person to clear his plate at the end of the meal. We were so stuffed that we retired to lounge to open our midwinter presents. Each person got opened their present, then guessed who had made it. It was surprisingly easy to work out who had made what. They then picked someone else's present and delivered it to them. The two opennings of note I think were Simon H's which he broke as he openned it. And I think to think that Anto openning mine was funny since he didn't have a clue what they were and I had to talk him through what to do.

Immediately after the present openning we got to listen to the midwinter broadcast. This is a broadcast that the BBC do for us. Each of the bases gets to choose a song to be played and also our friends and family can ring in and leave messages. For me it was fantastic to hear my dad send me midwinter greetings from deepest africa.

After the broadcast we all put our presents on the pool table and inspected them. We also started to have our pudding. 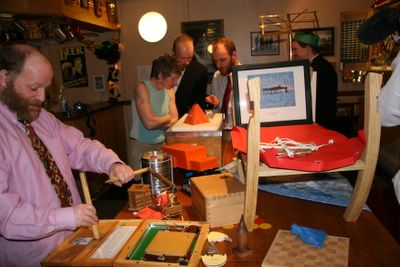 Everyone inspecting the midwinter presents. The present I got from Nicola is the draughts set in the foreground.

All the presents were pretty amazing and you could tell that some of them took a massive amount of effort. Here are some that I liked, of course I have included mine in there. 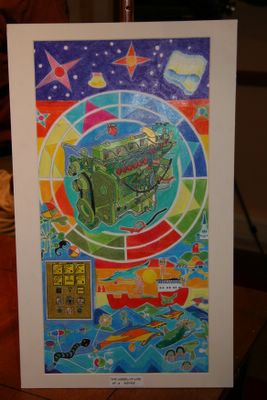 Chris' amazing colouring pencil drawing that he gave to Bob the Genny Mech. Entitled "The wheel of life of a Genny". 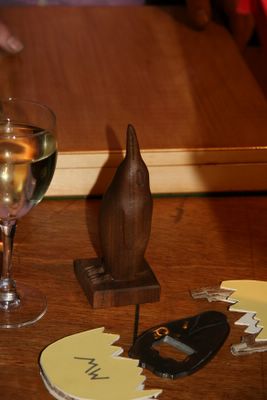 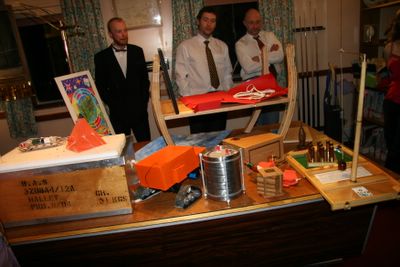 Another picture of all the presents on the pool. 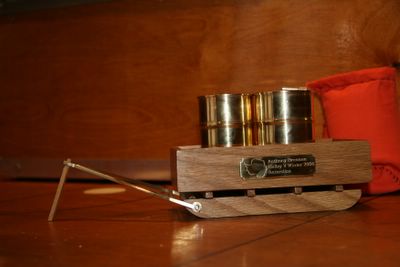 The present I made for Anto, a box sledge (made out of Ash from an old Nansen sledge) with two Avtur drums (made of brass) that are actually salt and pepper grinders. The orange sacs in the background are travel pouches for the grinders and look like P-bags.

It was a good night and it was nice to finally get rid of the presents. Hopefully the next entry will include pictures of the rest of midwinter including the cabaret night.
Posted by Bigjuli at 8:08 pm

Really cool look into your lives... keep it up.

you do look as if you are enjoying yourself and keeping busy working and playing. always look forward to your blog logg

Hey Big J. sorry I missed your call last night. Could you try again and if I don't pick up, leave your number. I PROMISE i will call you back.

G'day mate, it's a bit late but "happy midwinter".

Don't you hate it when people cheat at darts? Also you are a fat guts. Also glad to see you didn't post naked pictures of yourself. Also are you doing the time lapse beard growth thing? Also how has Kirsty never won a quiz before if she managed to win one with you? Does the base have a collective IQ of under 300?

mike d u r a dick

Did you not look closer at the darker naked run photos? Julius is the one with the bright yellow hat!

Didn't you mean that KEP is above the ANTarctic circle? Kirsty must be dead clever to win a quiz with you.