It seems that some fans of this blog find it slightly annoying that I start each entry with an appology, well I am sorry for annoying you but that is the way I feel. Its nearly been another week and summer here is running out. So too are the large jobs that have to be done outside. This means that we are doing more and more tidying up and packing up boxes of equipment that is to be sent out when the ship returns for second call. We still have to go out quite a bit as there are jobs (raises) that are left late in the season in order that they (the things you are raising) don't get buried as quickly as if you had done it earlier.

The saturday after my last entry was a fantastic day and we had the afternoon off. Because of the fine weather a cricket game was organised. I turned up after a good skijouring session. Earlier in the week I had somehow done a few 360s on the snowboard whilst being towed by the skidoo but haven't been able to do it more recently. When everyone who wanted to play cricket had turned up we only had 14 players. So we split into two teams, with Ads (Adam the comms dude) and Ian (Pompey the steelie) as captains.
The rules were as follows:
Each team took it in turn to bat with two of their players, each pair faced 4 overs. If they were out then they lost 5 runs. All the rest of the players were fielders. The final player on each team faced the bowlers alone for two overs. Scores were added up for each team. We played with a tennis ball.
The final scores were Ians team 1 run, Ads' team 9 runs. I was on Ads' team. Woohoo! The scores don't really reflect the quality of the game nor the quality of the banter in the outfield. I guess the champagne moment was when Craig (the plant operator) made a running diving catch before smashing into the snow. 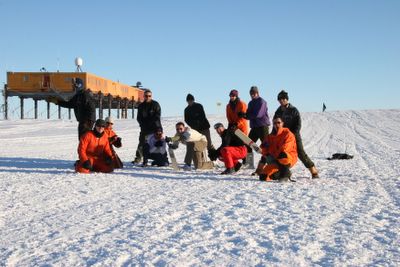 You'll be glad to know that cricket has been the one sport that produced no serious injuries. You have seen that Alex's ankle was broken in the footie, but I haven't told you that Jay Blow's (John Blower - Sparkie) shoulder was torn when playing softball.

On the sunday I got off base again. This is the second time but this trip was less glamorous than the trip to windy caboose. This trip was organised by Liz (the Chippie- see photo below) and was intended to be a training session for manhauling. As the name suggests Manhauling is Scott's (of the Antarctic)way of travelling. You attach a sledge to you and walk or ski to where you want to go hauling your sledge. As I mentioned in the last entry, whenever you go anywhere off base you carry loads and loads of stuff incase it gets really bad. This means that you have to haul a lot of stuff. In order to do this over reasonable distances you need training, and this trip was intended as a training trip. We only took a primus, some fuel, sausage sandwiches and chocolate, extra clothing. As with every training exercise it was a learning process. We had a rubbish sledge to pull, we used an only climbing harness to attach the sledge to the hauler and we didn't tie down the stuff in the sledge. Not tieing down the stuff meant that for the first km bits kept on falling off the sledge. Luckily like a well trained boy scout I had two bits of string in my pocket and we fixed the problem. 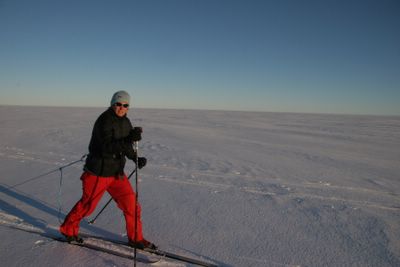 Liz, dragging the pulk sledge back.

When we set out the weather was gorgeous and we just thought it was going to be another fine day on the Brunt Ice Shelf. As it turned out, because the clear skys it was also one of the coldest days. I hauled the sledge all the way to the destination, the 4km marker. Just further on from the 4km marker there is a small mast which holds a solar panel and a UHF transmiting antenna. This is a radio micro barograph (or rubaro) and this experiment is run by the MET babes on the other platform (Smelly Simpson Platform). We were only wearing normal clothes (thats the sort of gear you would wear outside in England) with some windies (thin cotton outer clothes which stop the wind) over the top. By the time we got there one of my sunglasses lenses had iced over, sweat on my forehead had frozen and my eye lashes had beads of ice on them. We quickly got all our extra clothes on and started the primus and began to melt some snow for a brew up. After about half an hour the water finally boiled, by which time we were starting to get really chilly. We posed for this picture, where we sat down on the snow sofa that KIRSTY and CRAIG made (what excellent craftspersons they are). 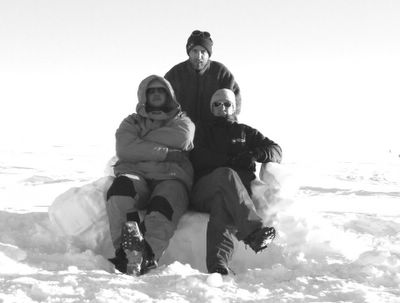 4 km man-hauling family portrait. Uncle Anto stands behind and Auntie Liz sits on the snow sofa with me.

Liz hauled the sledge back and we got warm again. There is a good reason to go manhauling, and that is it is lovely and quiet, except for the squeak and swish of the snow. And you get to feel like you are doing the proper antarctic hero thing a bit more, instead of getting you hands vibrated off by a noisy skidoo. I mean I love skidoos a lot, they are amazing, but it is the difference between steaming in a boat and sailing a yacht. The yacht is so much cooler and although it might not be quite as comfortable it feels right and you appreciate things a bit more. One of the amazing things as we came back was the miraging. Miraging happens alot here because of the ice causing air close to the surface to become colder than the air above. This causes diffraction which bends the light much like in a fibre optic cable. Sometimes we see massive icebergs on the horizon. On the way back from the 4km marker we were seeing different amounts of miraging across the base. So the Simpson platform was massive and the laws was big at one end. The garage and the Drewry were tiny. Its really odd. It would have been cool if people looking in our direction had seen three massive people sliding towards them but no one saw that.

Not much else has happened since then. Except for the poster incident. 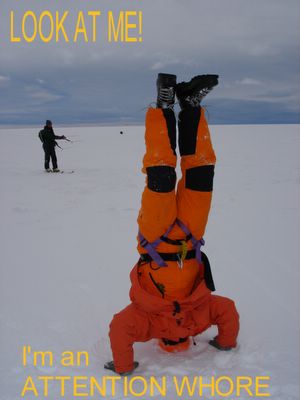 Someone put up these posters of me doing a head stand in the snow. It didn't take long to find out who is was (Kirsty). I still haven't found them all. All I can say is that some day I will have my revenge.

We've done more packing and cleaning. Oh yeah my radar broke for a bit when a power supply blew up. This caused me and Bryn to work until 10.30 pm getting an old replacement to work. A lot of people have also been asking me what my job is. I think I have already told you that I am the AIS engineer. I think I will try to explain my job more fully in the next entry. As you can see below time is running out and apparently the light will fade quickly. 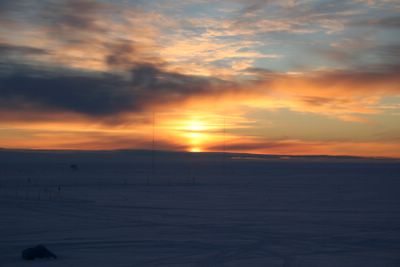 I think you should keep apologizing, I would probably read the thing every day if you put it up, especially if it involves cricket. Nice masts attention whore

Good craftsmanship KIRSTY and CRAIG on that snow sofa!

I dig Kirsty's sense of humour and I like the way you slipped another apology in...very skillful! Geoff is probably right though: keep apologizing. Besides, you're a bad man! R@D

Who are the MET babes on Simpson Platform and why do they smell?

Very nice blog. It's a nice picture about life in those iced regions

Looks like fun. I didn't read all of what you wrote, and I'm wondering now what made you use the phrase "laws tunnels". I suppose I may read again so as to gain more insight. Thanks.
Christian

Your blog is so amazing. What a experience you did! Wow!

Yours is the first blog I read and what a great idea to make a kind of journal of your journeys and it's so cool to read. Keep up the good work. I'm curious to see what your next journey will bring to your blog. Great pictures too!!!

Wow, to be exposed to all that experience! It's a fantastic thing. To be able and willing to post it on a blog, I say thanks for bringing some excitement to otherwise mundane life!

I am very happy about the trip,Infact I wish to be there.by the how can someone go for that vist or trip,I am really happy and I want to see that place.

Wow! I can see why your blog is on the 'blogs of note'. It's impressive. You seem to be a great team. Don't get home sick, time flies, Enjoy and be safe!

God you make me so jealous guys!!! Spanish mummy living in rainy UK here. No snow. No niddo Club. No sun spikes at dask, no sci-fic dinner... a lot of rain, that we do have. Keep the hard work, it's great to be able to read you at least!!!

your work is very interesting i wish some day have one job like yours.