Sorry again for not writing anything for a while, I've been a tiny bit busy with organising and sending out Tom and Neil to put up a remote instrument site about 20km away on the Precious Bay coast. This is west of Halley and is interesting because there is a polyna (weak bit of ice caused by currents) which opens up regularly. In spring there are low level ozone depletion events caused by chemicals produced when forming new sea ice reacting with sunlight and the ozone. The instrument put down there was an ozone detector and a spectrometer. The ozone levels are measured and the spectrometer works out what chemicals are in the air. Of course you need a power source for this and that is what I was supposed to be putting in. Then I broke my leg.

Since I broke my leg I have had to do a load of modifications. Make sure everything is going to work, then write a method of how everything goes together so that Tom can put it all together. 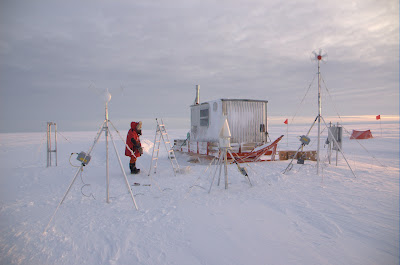 Photo courtesy of Tom.
The site at precious bay. The caboose and in front he wind turbines. The box on the right has a solar panel facing north and the tent at the far right is the loo tent. Neil's instrument will sit on the stand on the left. As you can see Tom has done a great job and everything went together as planned.

Another thing I haven't been able to do since I have broken my leg is make much. Moving heavy stuff and standing for much more that 15 mins has been difficult. I have however been experimenting with zen stoves. These are little alcohol stoves that are made as lightweight as possible. The classic one is made from coke cans. There is great website called zen stoves with instuctions how to make these. They are pretty amazing. I have also been testing them to see how fast they boil water. 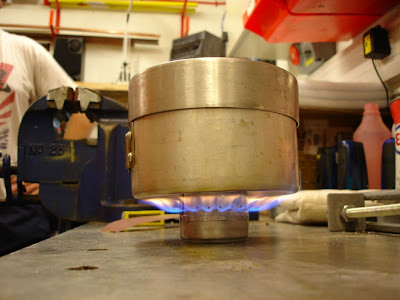 Photo courtesy of Kirsty.
This is the mini-zen which is a hybrid side vent burner. It has holes in the side and I made mine out of schwepps tonic water cans. Holes drilled in the side and a double wall mean that as the alcohol (meths in this case) heats up it pressurises and comes out the side. It weights 8 grams and the pot just sits on top of it. It boils a cup of water in 3 mins from lighting which is fantastic. 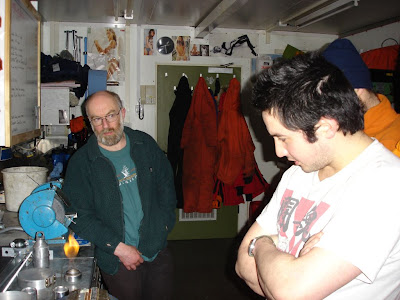 Pete the WBC and me watch as the coke can top burner burns. Sune the GA is behind me. Photo courtesy of Kirsty. 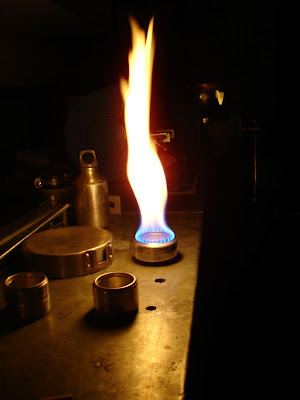 Another shot of the coke can top burner (24 grams). In the foreground you can see the tonic can top burner (8 grams) and mini zen side vent burner (8 grams).
I can now hobble around and put weight on my leg. I need to do this now since it will trigger the bone to get stronger. Of course I need to be careful so that I don't rebreak the bone. I have to be very careful, even so I can now put all my weight on the broken leg. 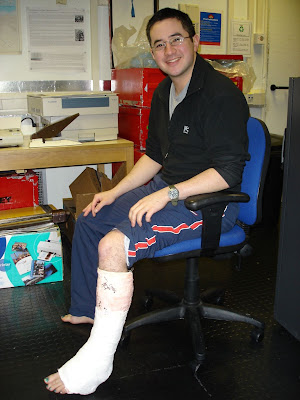 Me showing off my cast with the rocker on the bottom. I also have had a hair cut and apparently look 6 months younger, yay! Photo courtesy of Kirsty. 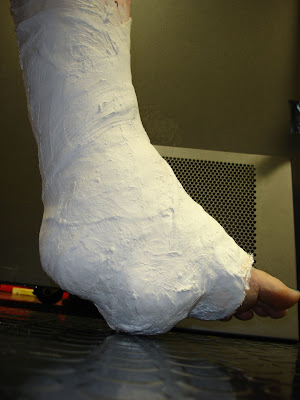 The rocker.
The rocker is essentially a roll of plaster that is then plastered onto bottom of the cast. The cast is then stengthened. This was done by the Doc last weekend. I can now walk with only one crutch and have been hobbling to the Piggott on my own twice a day with no help. Thats about 2km on crutches a day which makes my wrists hurt. Oh well no pain no gain.
I should be out of plaster in a week and a half.