Sorry once again for being so rubbish at keeping my blog updated. It seems that I have either been too busy and maybe a bit too lazy.

One other mishap that happened was that the hard drive on my laptop decided to kill itself. One second it was fine and the next it was making those "knock knock you know what has happened" noises. So I have spent the last week rebuilding my computer. Luckily I had a small external hard drive. I took everything off this and then sacrificed it to the laptop gods and now it is living as the laptop hard drive. I still don't know quite what I have lost but I will slowly discover it I am sure.

What is certain is that I now have no excuses for not updating the blog. Of course now I can't remember what the dickens happened in January but I will give it a try. I also had the honour of writing the base Web Diary which was not really up to the normal standard. So if I am repeating what I talked about in the web diary you must forgive me.

Unlike last year, when relief finished by New Years Eve, this year the madness started on New Year’s Day. After a week of the ship being stuck 50 miles from N9 in heavy sea-ice and everyone on base on standby for relief, it was a relief when the wind changed direction and the ship eased its way to N9. N9 is the site that we used last year which is 59km to the north-east of Halley and is used because there always seems to be either good sea ice or if that has disappeared then there is low shelf ice. There is low shelf ice there because there is a massive crack there that runs for about 100km all the way to the hinge zone. N9 was chosen, as there was too much sea-ice at the creeks this year, once again very different from last year when it was chosen because there was too little ice at the creeks. This meant that we had to prepare ourselves for the long drive there (max speed of a snocat pulling a sledge is about 15kph). For some strange reason I was the only winterer to be assigned to work shipside for relief. It was very exciting not to be on base but at the same time I was so used to being around a small bunch of winterers that not being with them was very odd. There was a good carnival atmosphere as we drove to the ship just because we were going to see loads of other people. 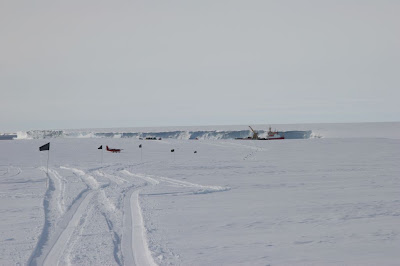 Our first view of the ship as we approached N9. The twin otter plane is on the left.

As usual everyone was split into day or night shifts so that relief continued 24 hours a day. I happened to be on night shift which I can now say is not as good as day shift. It is summer so we have 24 hour daylight but its still colder on night shift. Having woken up early in the morning to drive the snocats to the ship, I found out that the next night shift was when relief started. We ate some lovely salad on the ship and I tried to get some sleep. Of I couldn't really. We then started our shift and drove a number of people and some sledges to the halfway point. It then turned out that the snocat from the Halley end, that we were supposed to meet halfway, hadn't even left. So we stayed in the halfway caboose and played scrabble. It was a pretty tiring day and after that relief just sort of blended into a blur of driving in poor contrast and then helping loading beside the ship on the ice.

This year saw the arrival of some new vehicles: 2 Challengers and 2 John Dere tractors. However to begin with the snocats took the brunt of the work load. 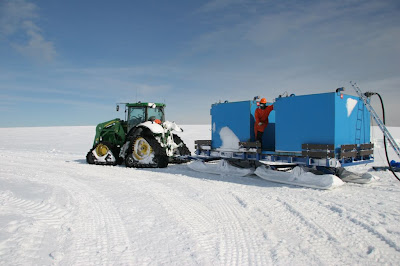 Jim the new wintering Chippie who was my driving buddy filling the transit tanks with avtur from the ship. The big green tractor is a John Dere with a track kit. 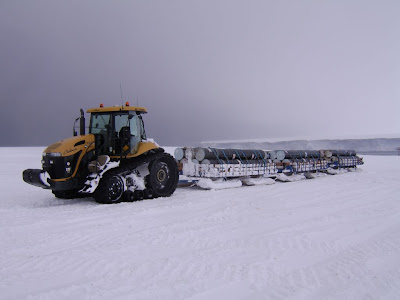 The new Challenger showing that it can do the job of three snocats.

As the new vehicles came on line the snocats were slowly retired until only the new vehicles were running. The weather was not nice either for a few days and this slowed down many of the shifts. There wasn’t that much wildlife this time at the ship except for a trio of Adelies that kept on turning up. 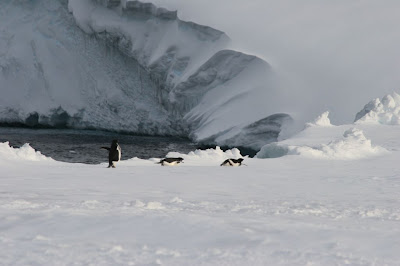 During relief the first few 2007 winterers arrived at their new home for the next year. Hopefully they weren’t too shocked. Even with the bad weather and only four vehicles performing the relief, the fact that they could all pull a lot more than the snocats meant the relief was over in a week. 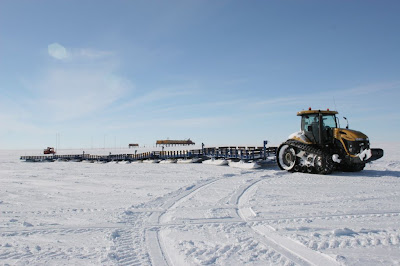 Finally everyone arrived on station and we could all get back on days and get on with the summer season. 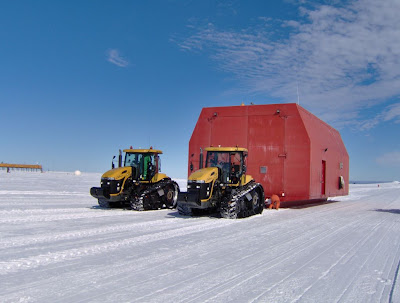 This year the major changes to the base seem to be the moving of the Garage and the Drewry buildings closer to the Laws. As well as that there is more Halley 6 sledge testing and a garage refurbishment. This is on top of the usual caboose, tunnel entrance raises and usual summer maintenance. On the science side we are installing a number of new instruments, lots at the CasLab, a new MF radar, and the flying of Unmanned Autonomous Vehicles (UAVs).

One of the experiments used scale models of the Laws platforms and models of the new Halley 6 buildings to investigate the wind tail profiles that may form at the new
Base. 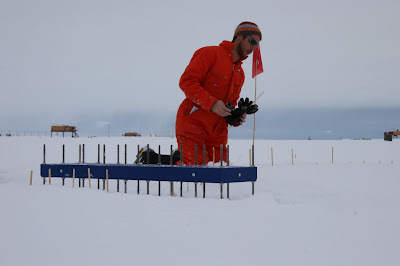 Simon measures the snow accumulation around the model of the Laws platform. 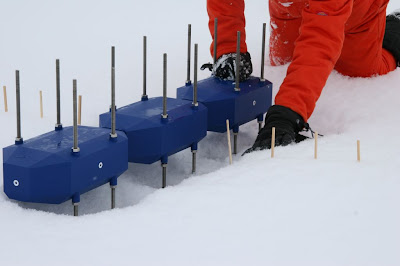 Looking at the snow levels around the new Halley 6 modules.


All this adds up to a very busy summer especially when you consider that the summer season is less than 6 weeks long.

The aircraft was very busy, firstly carrying out the servicing of remote science equipment on the continent towards the pole. Later it was being used to remove empty drums from some of the field sites close by. 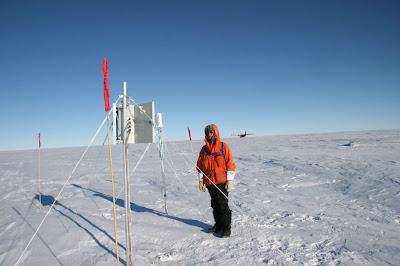 Alex services the instruments at A84. 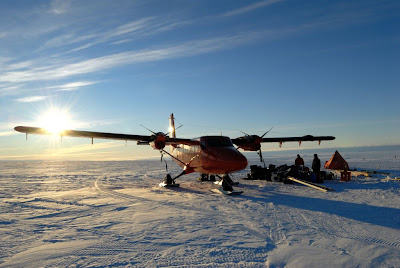 Somehow the new faces seem to have boundless energy (maybe we did last year) and are out every night skijouring, kiting or x-country skiing depending on the wind. 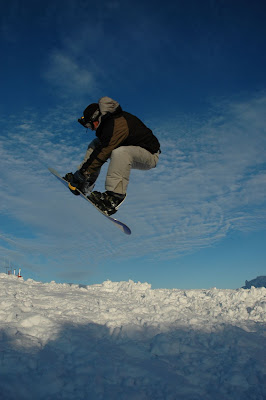 Judgie showing his skills just before he took a bad fall and hurt himself. 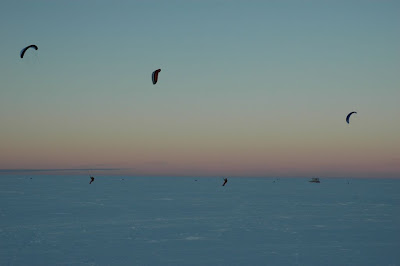 So many kites and so many good kiters. I thought my skills and a year down here would allow me to show off but all the newbies are naturals. Its just so unfair.
As usual there was the summer football match, with no injuries for a change. 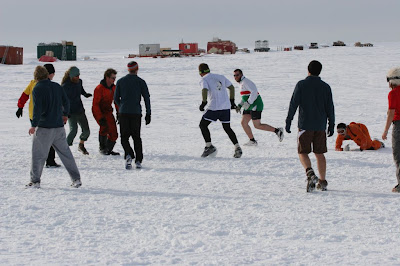 What you see there is me on the floor having just been pushed over by John (ex Winter BC and fouler) who has the ball.
Posted by Bigjuli at 6:44 pm

what can i say... this is another cold snowy blog i met for today...

Juli, I'm still reading your blog, and it's still great. Keep on trucking in the frozen south.

Ok each time I read your blog... it makes me want to suddenly become a scientist and work in Antarctica - then again... I think that with the cold I would be crying like a baby... I am sure your glad when you finally get the chance to head back home. Take care... Felicity