Its been sometime since I last wrote stuff on here. But it feels like it was about a month ago as so much has happened. We are actually on our own now. So much has happened that I will have to write another entry, maybe in the next few days, how we came to be left on our own. That is there are 16 left on base and we are in winter mode. So in the lead up to everyone else leaving I have been immensely busy. Most of it has been finishing off the last few summer jobs, these are outside jobs that will be too difficult in the winter. I have also been trying to absorb as much information about my job as possible. This has probably involved me asking far to many questions to people. I've also had some time for recreation of course, but its all been very similar to previous weeks. Its funny how the weather dictates so much of your life here. If the weather is bad the plane doesn't fly. If the weather is bad then all your work is indoors. If the wind speed is between about 9 knots and 20 knots and the weather is good then I, and normally Kirsty, will go kiting. If the weather is good and there is no wind then we will go skijouring. If there is no wind and the contrast is bad then we will go x-country skiing. Contrast is a difficult thing to explain unless you have seen it yourself. When the sky is covered in cloud the white snow surface loses all its definition and you can't see any texture or sastrugi. So we x-country ski when this happens so we won't injure ourselves doing a more high speed sport. So its been normal. One interesting thing that has happened recently has been the launching of the blimp. 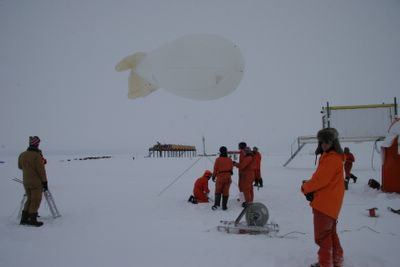 MET people testing their blimp. The Laws building is behind them. Liz the chippie is on the right looking at the camera. The blimp is a bit flaccid but they were only testing it. They are going to attach instruments underneath it and then they let it rise and measure things. I think its something to do with sea ice break up.

Actually just been told that the experiment is all about ozone depletion events that occur when ice forms. So in the spring (October) when the ice is breaking and re-forming you get the whole ice cycle going on and they are trying to see whether the formation of frost flowers has anything to do with ozone events. Its too complicated for me to understand.

We also had a final party of the summer. 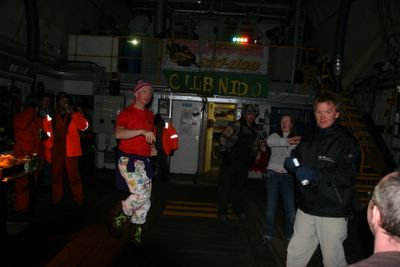 Club Nido begins to warm up as Craig, Vanessa and Dave the canadian start shaking their limbs. Club Nido is usually the garage. Its called Club Nido after the powdered milk we drink (Nido) which is actually really nice if you mix enough of it in. For the first few days here I didn't really notice that it was powdered.

Club Nido, is supposed to be the most exclusive night club in the world as it usually only operates in the winter. There was also a BBQ outside which was surprisingly good considering that it was about -15 outside. 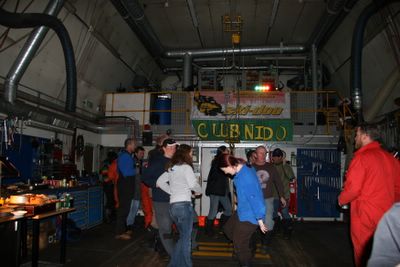 One of the things that is happening more and more is that we are having a few hours of relative darkness. It never quite gets completely dark at the moment but we get long sunsets as the sun skirts the horizon in the southerly direction. This has meant that in the last week we have been having some great sunsets. I guess this is another sign that winter is on its way. I am told that the sun departs very quickly and that in a couple of months we will be wishing for the sun. At the moment its really nice to be able to go outside occasionally and not have to wear sunglasses, of course your eyeballs just start to freeze if there is any wind. We will all be wearing clear goggles soon. 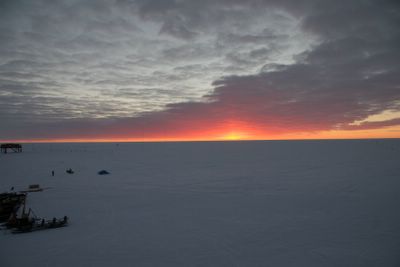 One of the amazing sunsets taken from the Laws building. On the left is the skidoo line where we park up the skidoos and night. 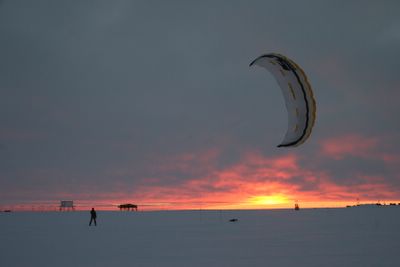 Craig kiting as the sun dips below the horizon. The building on the far left is BART where the weather balloon is launched every day, the next building along is the Piggott (my work place). 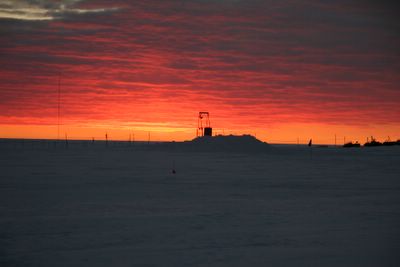 Sunset in front of the melt tank tunnel entrance. The mound is a mound of snow and ice piled up by the dozer which makes fill the melt tank easier. The melt tank is about 25m down so you actually shovel snow into a hole in the ground where there is a shaft to feed the tank. 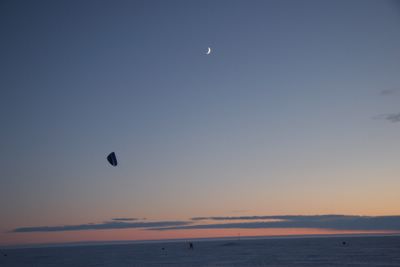 If the weather is good then it doesn't matter how dark it is. Kirsty was kiting when I saw my first star/planet (you can't really see in this photo but its just above the cloud on the right hand side) since arriving at Halley.

We have also lost the planes. The planes are the only way to get around quickly and the only way to get out of Halley in a hurry as they can fly all the way to Rothera on the antarctic peninsular and from there you can get a bigger plane back to the falklands. This is what Dave the comms manager did when he broke a tooth see his blog. The plane foxtrot bravo bravo has been the Halley plane for most of the time and it was the one that I was in twice. It was also the one that was damaged when we went to M83. It was due to leave Halley a few days earlier than it actually did because when it got back from its last trip (I think to Neumayer, the german base) it was found to have a broken front ski/wheel steering link. This had probably cracked when we made our landing at M83 and fatigued until it had properly broken. Another plane was sent from Rothera with the spares and the air mechs changed the whole front wheel/ski assembly. 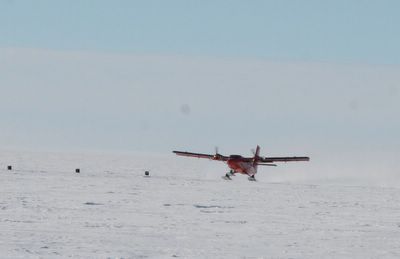 The plane takes off for the final time with the air mech Dave the canadian as co-pilot. We are left with no air cover.

So that was that for the planes. The skiway will remain open until the planes leave Rothera but that won't be long and then next year we will have to put the skiway back in its place and prepare the surface for the next planes which should be arount October/November. 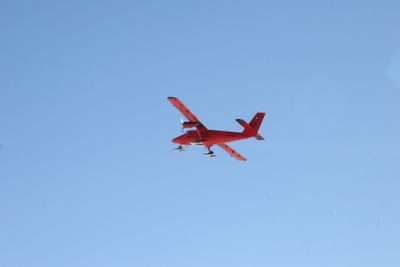 Victor-papa-foxtrot-bravo-bravo leaves performs her final flypast before heading off to Rothera. Hopefully we will see Ian the pilot next year.

Now that it is Winter down you way, can we still send you post?