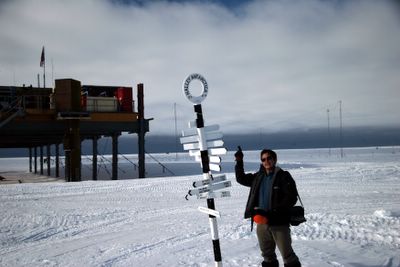 Proof that I have finally arrived. The Laws Building is in the background. There are also masts behind me which are for the HF radio which is used for communications with field parties.

Once again, I have to appologise for not updating the blog earlier. I should explain that I didn't update the blog after I arrived since I was a bit tired from doing 12 hr shifts. Now we are only working from 8am to 7pm which is nearly as bad. The work is also quite physical and just moving around in the ice/snow is difficult. We do have skidoos for when we have to carry stuff but the base is actually quite small and it is usually less than a ten minute walk anywhere.

As I explained earlier. The base has this sort of tardis thingy going on. Its fairly large on the inside but from the outside it looks tiny. Because of the flatness of the ice you can see the base from miles away (see last entry) and from a distance the base looks pretty big. Howevery when you get closer it becomes smaller. So when we finally arrived at the base, my immediate thoughts were that the place looked a bit industrial and the accomodation reminded me of a youth hostel. I also found out that I had drawn the short straw and been given the room with Dan the chippie from last year, who is well known as the loudest snorer. I mean you can hear this guy from miles away and the whole bed shakes. Everyone I met on the base tried to show me to what they thought was a spare room (it was actually taken by Nicky the Chef- {begin rant} which means that there are three girls in single rooms - I mean what gives them the right to privacy bla bla $%£& them damn them to klfds {end rant}) for me to sleep in. As it turns out I have got hold of some amazing ear plugs and can sleep really well - the guy next door can't and is having trouble because of Dan's snoring. 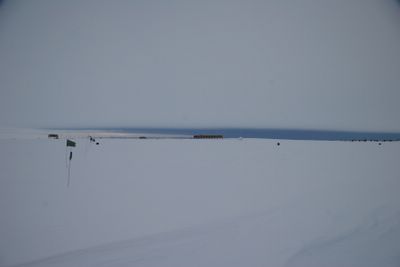 Another view of the base. Photo taken from about 500m away from the Laws at Wonky caboose close to where we camped out for co-pilot training As you can see everything is now very small and close together.

After a day off after relief we had the weekend and new year. On the day off, I slept in for a while and then tried to go x-country skiing. This is a lot harder than you think because the skis are thinner than normal, have very little in the way of an edge so you end up sliding laterally and are not clipped in at the heel so you have to balence on the balls of you feet. I went around the perimeter (5km) and only fell over twice, once right in front of everyone. I also put my head around the door of my new office. 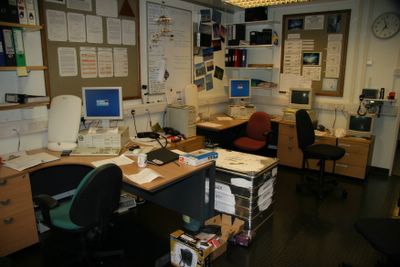 The office on the Piggot platform. Its pretty normal. My desk is the one of the left. The white thing on the left of the computer is a light box, that is used in winter to give us an endorphin kick and stop SAD.

The next day I did very similar things and went around the perimeter again on the x-country skis this time only falling over once but this time a bit worse than before. It was new year but it felt very difficult. At about 9pm local time when it was turning 12 in the UK there was a massive queue for the two outside phone lines so for the first time in many years I didn't phone anyone. To celebrate here we had a curry night and then ended up playing in the Salsa band in front of everyone which was surprisingly well received considering the amount of noise we made (the building nearly fell apart and an air vent fell off the roof and hit the Kev the old chef).

The day after new year, I went skiing again, this time with Kirsty. We got about half way around the perimeter before I remembered that there was a football match going on. This was on a specially prepared groomed snow pitch. As we arrived at the base to remove our skis we noticed Vicky the doc getting ready to go out. She had been called to the pitch as someone was injured. By the time we got to the pitch Alex was being transported back to the Laws Building on the back of a skidoo. It turns out that he has broken his ankle and will be in a plaster and out of action for 6 weeks. 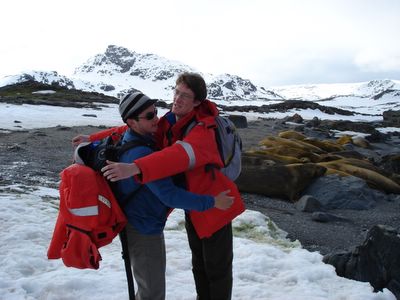 Alex and I do a bit of team bonding. This was on Signy about a month ago.

As you can see a normal healthy person. I get to drive him around on a skidoo to take him between the platforms. The broken ankle thing is really annoying for Alex as he was supposed to go out to one of the automatic logging stations further south. So he misses out on co-pilot training, getting a flight closer to the pole and seeing antarctica from the air. Very annoying. 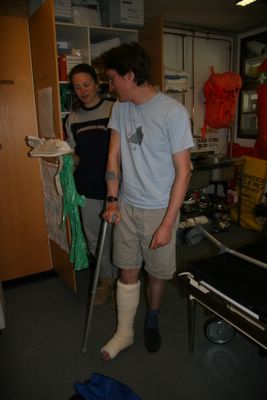 Alex just before Vicky the Doc changes his first plaster.

Which brings me neatly to Co-pilot training. When you get flown around you have to do co-pilot training. This is because the weather here is so variable and although you might be able to take off and reach you destination you might not be able to return. If this happens you have to know how to pitch a tent and live out on the snow. You always carry 20 days of food for everyone in case you get stuck. Last year Bryn (the old AIS engineer (my job)) got stuck out for 11 days. Your other job as co-pilot might be to fly the plane for a while when the pilot is having a rest, oh and you have to give a weather report back to base. We (the electronics chaps) are on the top of the list for flights so had our co-pilot training first. 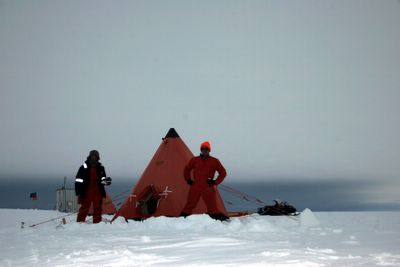 Chris and I get ready for bed. As you can see the tent door is firmly open. The tin shack in the background is Wonky caboose which has a few beds inside. You can use this when you feel like getting away from the base. 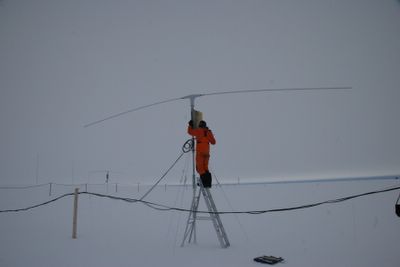 Bryn (the guy I am taking over from) working on one of the AIS receiver pre-amplifiers. In the background you can see the two 45 m masts that hold the log periodic transmitting antenna. 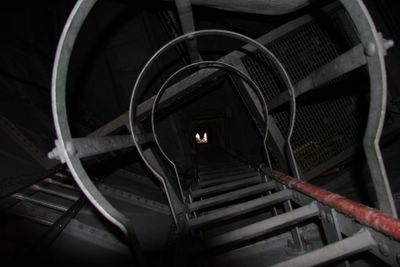 Looking up from the bottom of the Melt-Tank access shaft. the little square is the trap-door onto the surface.