Whats been happening for the last Month? - Planes - Cranes and Getting ready for the Summer

So its been ages since I last posted and the main reason for that is that there has been too much happening. Now that its getting a lot warmer it means that we can go out and do a lot more outdoor work. Another thing that has happened is that the CAA (Civil Aviation Authority) in the Uk delayed the BAS planes for some reason (something to do with cargo weights and the stength of the wheel skis that they use) that I'm not really sure about. They are coming but later than expected. This means that new people (Pat the base commander and Ben and Martin (vehicle guys)) won't be coming in so early. The RRS Ernest Shackleton is also required somewhere else in the North earlier than usual which means that this summer season is going to be shorter than normal. So we are being urged to get as much work done as possible.

One of the people put under a lot more pressure because of the delayed planes is Anto the vehicle mech who has to prepare all the vehicles for relief on his own. So some of us have been giving him a hand and learning to drive some of the vehicles around a bit more. I seem to have become an expert at dozer driving. 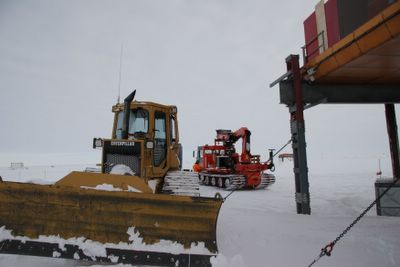 Picture of the D4 dozer that I drove for a day helping Anto the vehicle mech move stuff around. In the background you can see the Nodwell crane parked by the Laws platform. We were transfering propane gas stillages up the the platform and getting rid of the empty ones. That day I think I worked until 11pm.

The other thing that has happened is that the skiway has been laid down. On a bearing from the 4km marker that we raised the other day. And the first planes have been through. The first was a Basler which is essentially a DC 3 that has had turbo props added instead of the usual piston engines and its also slightly stretched at the front. This plane came through nearly a month ago bringing with it fresh veg and new people. 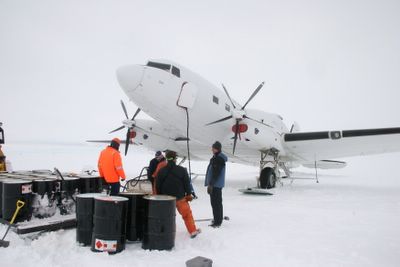 The Basler being refueled. This is actually the 2nd Basler, I didn't make it down to the skiway either time but Vicki the Doc took my camera when the 2nd plane came in.

The plane dropped off its food, refueled and headed off the the Shackletons (mountain range) and then Novolazarevskaya or Novo as most people call it. A few days later we heard that the plane had crashed. We were not allowed to tell anyone for a bit as they hadn't informed next of kin etc... No one was injured and a search and rescue (SAR) was launched. The SAR plane came from Patriot Hills and flew through Halley. The SAR plane turned out to be a twin otter just like the BAS planes. 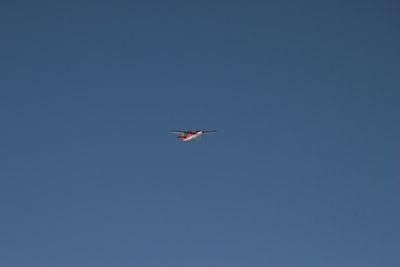 The Twin Otter from Patriot Hills as it approached Halley.

I did make it down to the skiway this time and even though we knew that the plane was here for a SAR there was a bit of a buzz as we were going to see new people. It was a lovely day and we spotted the plane a long way away. When it came close we started to hear the UHF radio talk between Dave the comms manager and the pilot. So you can picture the reaction from some of the men at the skiway when we heard the female voice of one of the pilots. Some of them (not me of course) suddenly became all shy and started grooming their beards. Of course this was understandable since they hadn't seen a different lady for a long while. Not that you would call any of the ones on base ladies anyway (only joking). 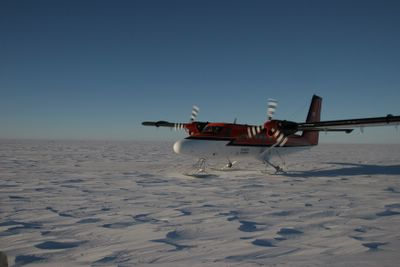 The Twin Otter, taxiing in. This plane is pretty much exactly the same as the BAS ones except that they have full skis instead of the wheel skis that BAS favours. 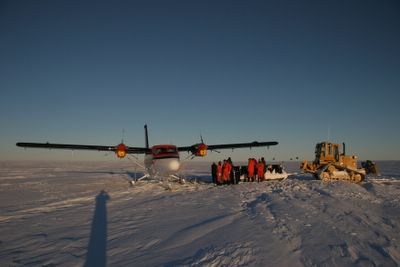 The plane being refuelled at about 10pm, although it is 24 hour daylight the shadows can still get very long late at night. 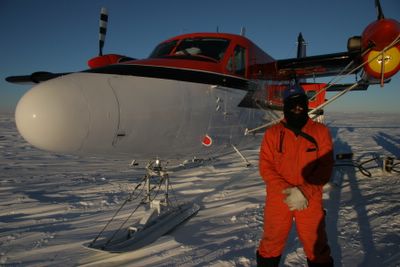 Me (don't I look dashing) standing next to the nose ski of the plane. You can see how robust the ski landing gear looks. They are alot stronger that the wheel skis that BAS use but then again you can't land on gravel runways with skis.

The crew of the plane, had a leisurely dinner and didn't seem in too much of a rush for a SAR but that might have been due to slow communications with some of the other bases. They seemed to enjoy the base and I don't think we scared them too much. At one point, whilst Brad the mechanic was eating dinner, however, about half the base was sat at the other end of the table asking questions. We were probably staring because we haven't seen new people for a long time. We then helped them refuel. 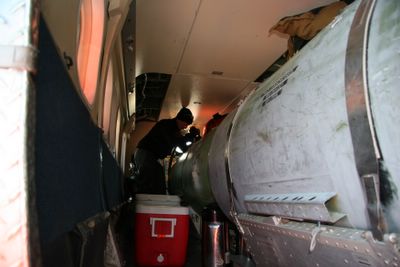 Amy the copilot (who caused quite a stir with some of the men on base) checking the fuel levels in the two massive ferry tanks that they had fitted in the back of the plane. 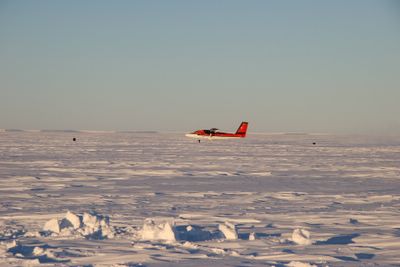 The next day after the twin otter left, despite it being a saturday we spent the whole afternoon drum raising. These drums were 44 gallon (205 litre) drums of Avtur (aviation fuel) which nearly everything down here runs on. They are piled in to heaps of 200ish drums and you have to use the Nodwell crane to hoik them out of the snow. Once they are out of the snow they are dropped onto sledges and flipped upright by hand. Thankfully I didn't have to do too much digging or flipping as I was the designated dozer driver for my shifts. 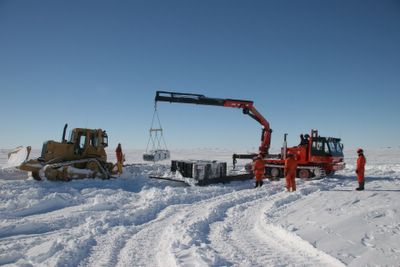 Raising drums of avtur out of the ground and loading them onto sledges. 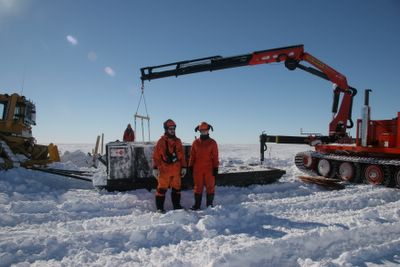 Me and Kirsty just before we did our double shift (I think because Anto thinks I am such a good dozer driver). 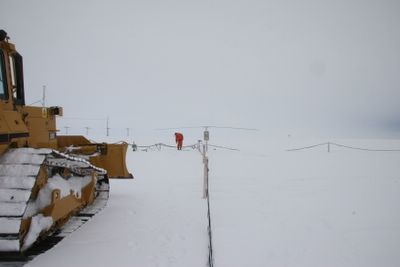 More raising, this time its the AIS receiver antennae. Because of the snow accumulation we had to raise them 2m. As you can see 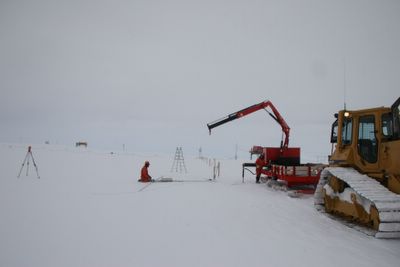 Once they are lowered to the ground, we checked that they were ok. We attached a new bit of scaffold of then craned them back up and slotted them on. 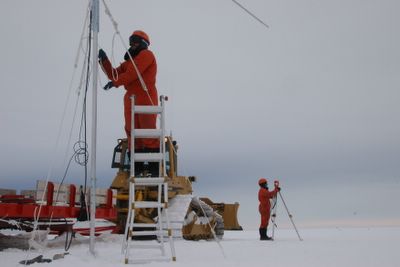 Me tidying up the cables whilst Liz sets up the theodolite in the background so that the poles are vertical. 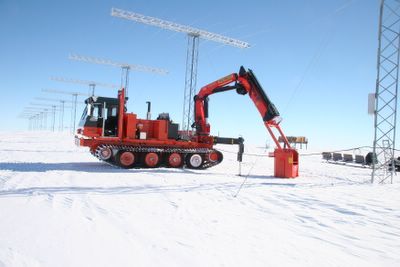 Nod 4 with the basket attached. This allows us to lift 250kgs to a height much more than a cherry picker, but relies on the man on the ground to safely move us around. 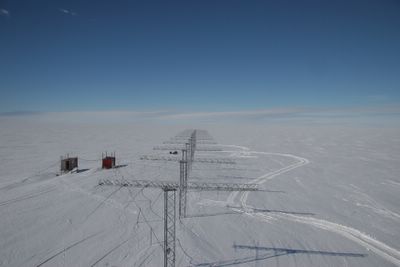 The view of the SHARE array from way above tower number 4. This is from the basket at full extension and being on a flat ice shelf its really odd to look down on anything, especially these antennae. 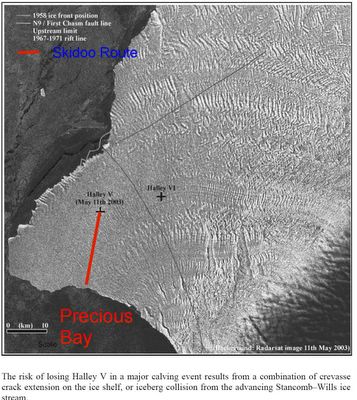 Precious Bay is the bay to the south west of Halley and it is this sea ice that is thought to break up and reform causing ODEs (Ozone Depletion Events). The ODEs trigger sensors and Halley and then the Simpson team launch their Blimp to get a profile of the ozone. 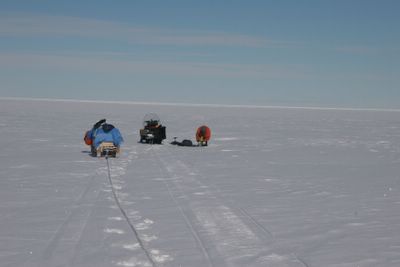 Simon putting on his crampons before our walk down to the ice cliff edge of Precious bay. 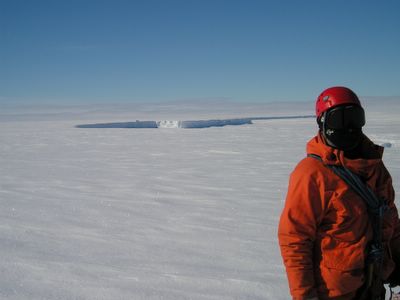 Me near the edge at the bay. Photo courtesy of Simon the GA. 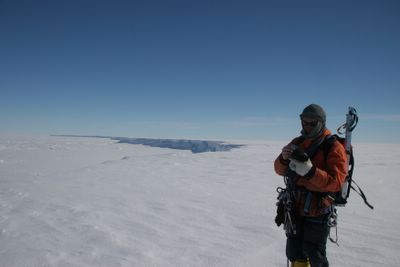 Simon the GA checking out the magnificant view. It was amazingly beautiful with this massive bay and the sea ice stretched out unbroken for miles ahead of us. 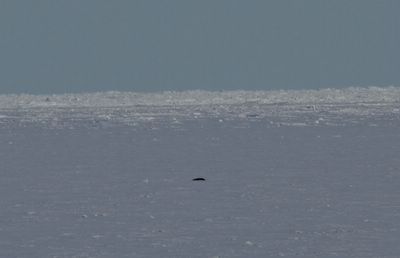 Right out on the iceshelf we saw this black dot probably 2km from us and all we could tell was that it was an animal. I put on my big lens (70-300mm) and zoomed in as much as I could. The above picture is cropped and you can make out that it is definetly a seal. So given the state of the ice its probably a Weddell seal (they are the only ones to keep open holes in the ice) but it could have been a leopard seal that had travelled a bit on the ice. From the distance we were away it was just life. 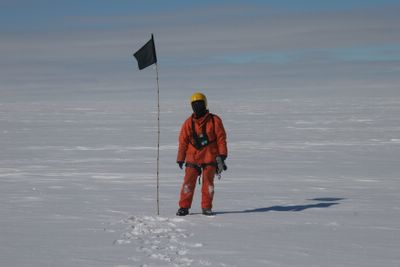 Me next to a marked flag planted at the Precious Bay experiment site that should tell us about snow accumulation. 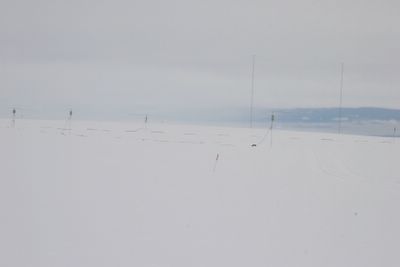 More raising, this time it was the catenary posts that hold up the wires the antennae. You take of the wires then get a dozer and use the a chain attached to the blade to pull the posts out of the ground. 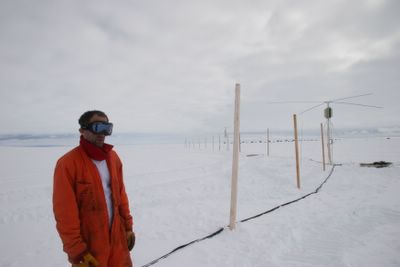 Chris posing after we had put all the posts back in the ground in their raised positions. 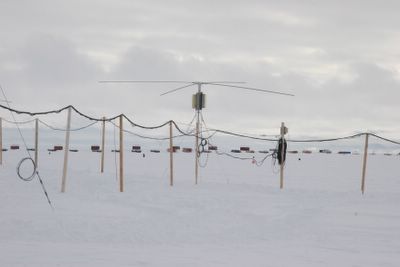 And finally the catenaries are back up. 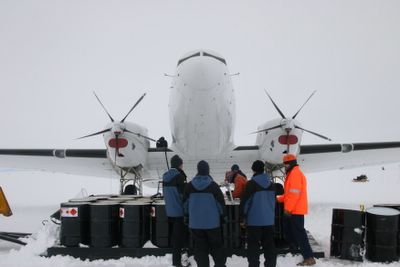 The Basler again. Its a fantastic plane. You can see the person on the wing (Francis I think) who is holding the fuel pipe that is pumping fuel into the wing tanks. 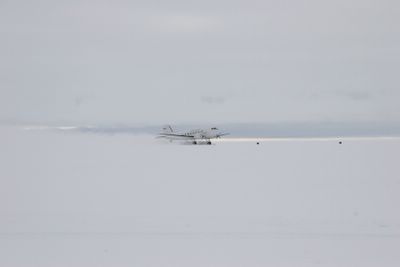 The plane heading off to Novo to move people around and to resue its sister plane nearby.

Hi Julius gosh what a time you have been having.looks like hard work but fun.sorry I could not get the video to work lack of knowledge on my part I think maybe I have to download sonething.

Do you think progressively less about the world outside Ant-Arctica the longer you spend out there?